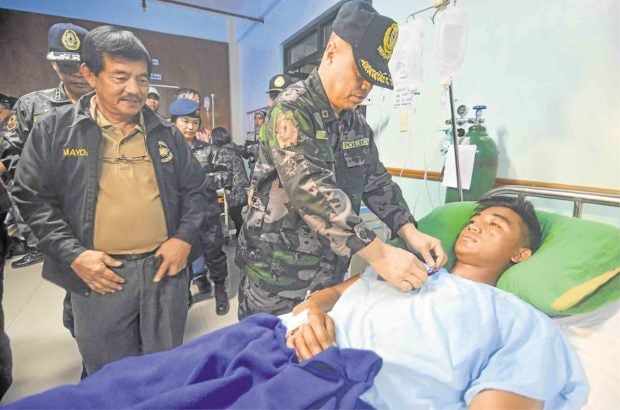 BAUKO, Mountain Province — War was supposed to be taboo in the popular tourist town of Sagada, which its leaders had declared a peace zone in 1989 after three youngsters were killed in the crossfire between soldiers and New People’s Army (NPA) rebels.

But while the government and the NPA recognized the community decision, both camps had accused each other of violating it.

A skirmish on June 5 on Mt. Sipitan in the village of Aguid was a breach of the peace zone by rebels who had set up camp near the area, according to Senior Supt. Allen Ocden, Mountain Province police director.

A team of policemen was ambushed by 50 rebels when they investigated reported sightings of armed men on Tuesday. The clash left a policeman, PO2 Henry Dion, dead and 11 others wounded.

Ocden said evidence suggested some residents might be linked to communist rebels in the area.

Supt. Joseph Bangcawayan Cayat, who was among the wounded, said the police operation was prompted by a tip from civilians.

Cayat, a native of Sagada, said parts of Aguid had been turned into a training ground of rebels from nearby villages and towns.

The NPA Leonardo Pacsi Command, which operates in Mountain Province and Abra, claimed responsibility for the ambush.

Its spokesperson, Magno Udyaw, said the attack was “a message” for the police and military not to enter “our areas.”

Rebels also blamed the government for “using the peace zone as the expedient” excuse for defeats suffered by police and military.

“They are the ones violating this one-sided declaration,” said a June 6 statement of the NPA Cordillera People’s Democratic Front.

“The people of this place know fully well that there was never a time that the area had been spared from combat operations,” it added.

Caught in the back-and-forth accusations were Sagada residents who demanded that the peace zone be honored.

“Have mercy on the people. We want peace. Sagada has been tarnished again,” said Francis Degay, whose son-in-law, a soldier, was killed in a clash with NPA in the village of Antadao in 2014.

“Where has the peace zone gone?” he said.