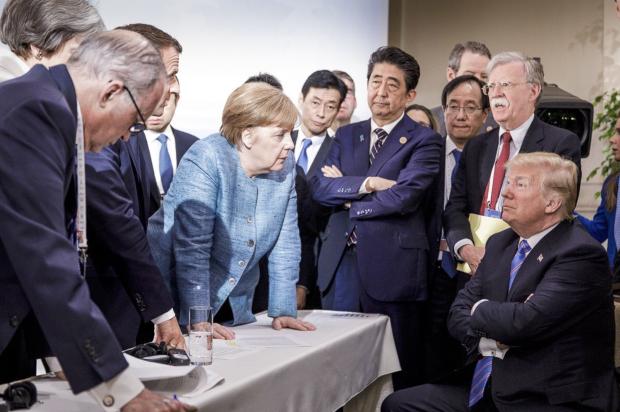 FRANKFURT, Germany — One viral photo is telling it all about tensions at the G-7 summit.

A picture of US President Donald Trump and German Chancellor Angela Merkel displaying less-than-friendly body language is turning out to be a defining image of the contentious meeting of the Group of Seven leaders of the world’s advanced economies.

The picture, snapped Saturday by German government photographer Jesco Denzel, shows a standing Merkel with her hands firmly planted on a table staring down at Trump, who is seated with his arms folded and eyes glaring.

Japanese Prime Minister Shinzo Abe stands next to Trump, also with folded arms, as French President Emmanuel Macron leans in next to Merkel.

The BBC parsed the picture by identifying all nine individuals in it, including British Prime Minister Theresa May, who is barely visible, and Larry Kudlow, head of Trump’s National Economic Council as well as several Japanese officials and US national security adviser John Bolton.

Another image of the same gathering however suggests a more relaxed interaction, with Merkel smiling and Trump making eye contact.

The G-7 – an informal annual summit of democracies with highly developed economies – took place Friday and Saturday in the Quebec resort town of Charlevoix in Canada, which holds the rotating leadership this year.

Saturday’s picture was not the first awkward moment between Trump and Merkel, who makes no secret of her disagreement with the American leader’s approach on trade, his rejection of the deal to limit Iran’s nuclear program and his decision to take the United States out of the global Paris deal to fight climate change.

Merkel’s March 2017 visit to the White House was marked by Trump either not hearing or ignoring her offer to shake hands in the Oval Office. A subsequent visit in April this year warranted only a working lunch for the German leader, several days after fellow EU leader Macron got the full, formal state dinner treatment from Trump.

The Charlevoix G-7 summit was marked by sharp disagreements over Trump’s decision to impose higher import taxes on aluminum and steel imports. The measure hits EU trading partners even though the main target is overcapacity at state-backed Chinese producers, who Europe and the US have long complained have flooded markets with cheap steel.

The G-7 summit participants managed to patch over their disagreements and agree to disagree on some issues in a joint final statement. Yet after leaving the summit, Trump tweeted that he would instruct U.S. officials not to endorse the G-7 statement, after objecting to comments from summit host Trudeau.