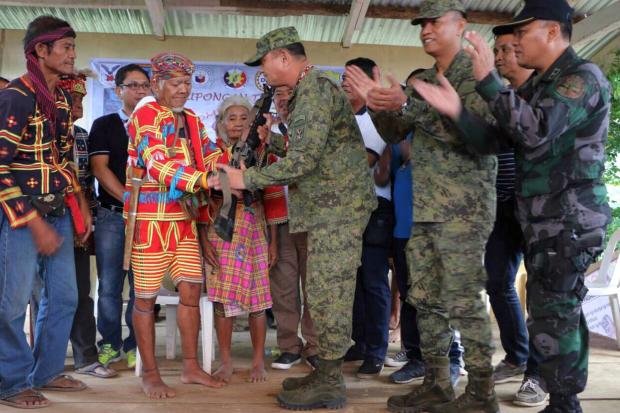 Datu Guibang Apoga shakes hand with Brig. Gen. Ernesto Torres of the 1003rd Infantry Brigade during his surrender on Saturday, June 10, 2018. (Photo from the Philippine Army)

DAVAO CITY — A tribal leader who had waged war with the government for two decades in the hinterlands of Davao del Norte and Bukidnon surfaced on Saturday and vowed to work with authorities, virtually ending one of the fiercest resistance by indigenous peoples (IPs) in defense of their ancestral lands in Southern Mindanao, a military spokesperson said on Sunday.

Datu Guibang Apoga, a member of the Langilan-Manobo tribe, surrendered to the government during a tribal peace gathering at Barangay Palma Gil in Talaingod, Davao del Norte, according to Maj. Ezra Balagtey, spokesperson of the Eastern Mindanao Command (Eastmincom).

The tribal leader launched a “pangayaw,” or tribal war, in 1993 against government troops and security personnel of logging firm Alcantara and Sons (Alsons).

He had resisted the entry of the logging firm into the vast Pantaron Range that straddles the borders between Davao del Norte and Bukidnon provinces.

Armed with just bows and arrows and improvised rifles, Apoga’s group attacked Alsons and resisted government troops sent to arrest him and his followers, forcing him to flee deep into the jungle.

He was slapped with several murder charges as a result of the attacks on Alsons guards and workers.

Apoga leads the tribal resistance group Salugpongan Ta Tanu Igkanugon (Unity for the Defense of Ancestral Lands), which the military has labeled a communist sympathizer. 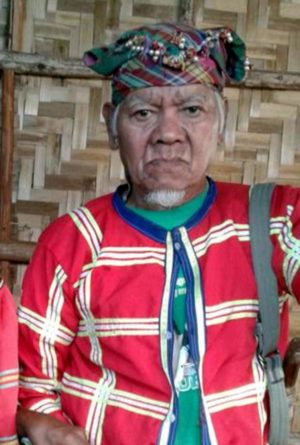 The tribal chieftain’s resolve to defend his ancestral domain from perceived military and business intrusion earned him an award for the Gawad Bayani ng Kalikasan (Hero of the Environment) in 2017.

Balagtey said Apoga was received by fellow tribal leaders and local and military officials during a “tampura,” or peace gatherin, at Sitio Nasilaban.

“As a gesture of genuine desire to finally support the government, Datu Gibang turned his rifle over to Brig. Gen. Ernesto Torres Jr., commander of the 1003rd Infantry Brigade and Lt. Col. Edwin Paredes, 56th Infantry Battalion commander,” Balagtey said, adding the event was witnessed by about 500 tribal elders and members.

Apoga was reportedly “very elated” on his return to his community in Nasilaban, together with his fellow leaders and their “bagani,” ortribal warriors, the military spokesperson said.

The elusive tribal leader was reportedly convinced to end his hiding and support the government following the efforts of Paredes.

“We welcome the return of Datu Gibang,” Lt. Gen. Benjamin Madrigal Jr., Eastmincom commander, said. “His tribe has long been waiting for his return. With this peace covenant and with his leadership, we hope to achieve a lasting peace in the area of Langilan-Manobo tribe and together we can work for development.”

Balagtey said the tribal chief’s murder charges had been temporarily dropped even before his apparent surrender. /atm

Read Next
Magnitude 4.1 earthquake hits Davao Oriental
EDITORS' PICK
PH to send 584 athletes, 161 officials to Vietnam SEA Games
Gear up and get ready to play with Yamaha Mio Gear
SSS: Members on home quarantine due to COVID-19 can apply for sickness benefit
Acer starts the year off strong with the Aspire Vero National Geographic Edition
Kalinga, Ifugao, Mt. Province, N. Samar will be under Alert Level 4 from Jan 21-31
Mobile COVID-19 vaccination for commuters, transport workers set at PITX
MOST READ
Imelda Marcos trends on Twitter after octogenarian jailed for allegedly stealing mangoes
Mayor Vico counters vice mayor: ‘Did I say anything about his family?’
Municipal court in Pangasinan sets arraignment for ‘Lolo Narding’
‘Unbelievable!’ Pacquiao hits DA’s plan to import 60,000 MT of fish
Don't miss out on the latest news and information.