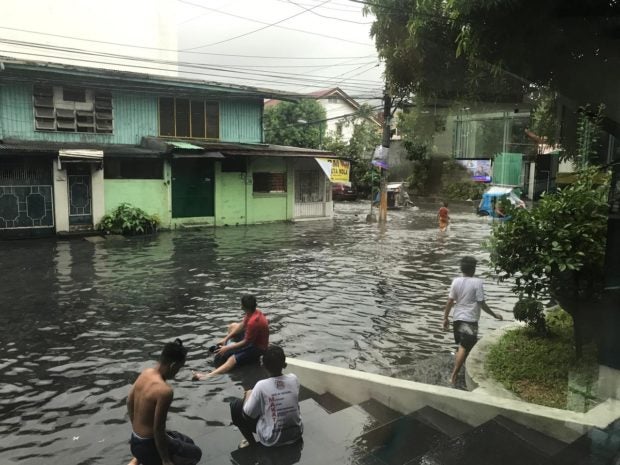 Children in Makati City play under the rain as floodwaters submerge this part of the street at the corner of Pasong Tirad and Mola Street. Heavy rains, induced by the southwest monsoon, is brought about by Tropical Storm “Domeng.” INQUIRER.net photo

Several streets in different Metro Manila areas were submerged by floodwaters on Saturday brought about by enhanced monsoon rains, according to the Metropolitan Manila Development Agency (MMDA).

The agency later added that a portion of East Avenue in front of the National Kidney Institute and a segment of the southbound lane of EDSA-Tramo in Pasay were also affected by gutter-deep floodwaters.

In an earlier report, the Philippine Atmospherical, Geophysical and Astronomical Services Administration (Pagasa) said that the heavy rain experienced by Metro Manila and other provinces was caused by the southwest monsoon (Habagat) intensified by Tropical Storm Domeng.

Pagasa has issued an Orange Warning for Cavite, while a Yellow Warning has been raised all over Metro Manila, Zambales, Bataan, Batangas, Bulacan, Laguna and Rizal.  The agency said that flooding is possible in these provinces, especially along low-lying areas

As of now, the MMDA, however, said that all affected roads are still passable to light vehicles. /jpv