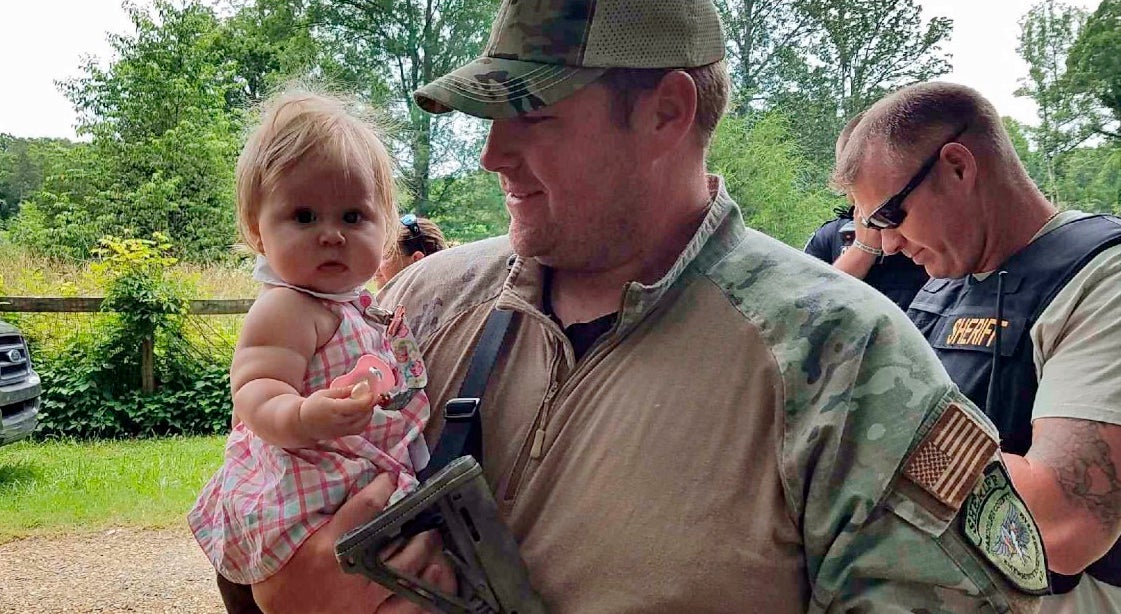 RALEIGH, North Carolina–Following an anonymous tip, police rescued a kidnapped 7-month-old girl and arrested her father at a mobile home in North Carolina, nearly two days after he took the infant from her mother at knifepoint in Virginia, authorities said Tuesday.

The moment brought an end to the massive search for the girl and her father, Carl Ray Kennedy, a 51-year-old sex offender with a long criminal history. He had painted his gold Suzuki black to try to evade capture, police said.

Emma and her mother, Kristen Murphy, were reunited at a local hospital where the baby was examined, said Murphy’s sister, Amy Wyatt Metzger.

Emma is “totally fine and healthy. Everything has checked out just fine,” Metzger said.

Kennedy didn’t say much when he was arrested, the sheriff said. “He seemed like somebody who had been on the run, who was tired, I guess,” Graves said.

The rescue and arrest occurred in Randleman, North Carolina, about 65 miles (105 kilometers) south of Danville, Virginia, where Emma was abducted Sunday evening at a gas station, police said.

Four 911 calls about 10 minutes apart led police to Kennedy. One woman told the operator Kennedy called her “wanting me to get her some diapers or formula. I’m panicking,” she said in the call released Tuesday.

A man called 911 to say he heard from someone who saw Kennedy on the side of a road changing a tire of a car that had been spray-painted black, while a different woman said a friend called her after seeing father and daughter go inside a home. The names of the callers were deleted in all the recordings.

The same woman from the first call reached out to 911 again to tell operators Kennedy might leave soon if they didn’t hurry.

“I’ve got somebody watching making sure everything is OK. I don’t think he would hurt Emma either, but you know,” she said.

Metzger said Kennedy had said things in recent months that alluded to hurting Murphy or Emma, such as, “I’m going to blow up your family’s house” or “If I can’t be with the baby, you can’t either.”

Kennedy lost custody of the girl a couple of months ago, Metzger said, and had been harassing Murphy and her family in person, by phone and on social media since then.

Kennedy met Murphy a couple of years ago at a nursing home, her sister said. She was a certified nursing assistant and he was a patient in poor health, reportedly from a boating accident, Metzger said.

They lived together for about a year and a half in Randleman, she said. After they split up, Murphy moved in with her mother in Danville.

“Carl does not have anywhere to live,” Metzger said. “To the best of our knowledge, he has been floating around at friends’ houses, wherever he can stay. He was evicted in March because he was incarcerated at that time.”

Kennedy was out of jail on a $250,000 bond on a drug distribution charge at the time Emma was kidnapped, police said.

Maness described it as “a picture-perfect takedown. It was text book.”

Kennedy was being held in the Randolph County jail and will face an extradition hearing to Virginia. Danville police Lt. Mike Wallace said Kennedy will face charges of abduction and related counts.

The family didn’t expect this happy outcome. “We were prepared for the worst, honestly,” Metzger said.