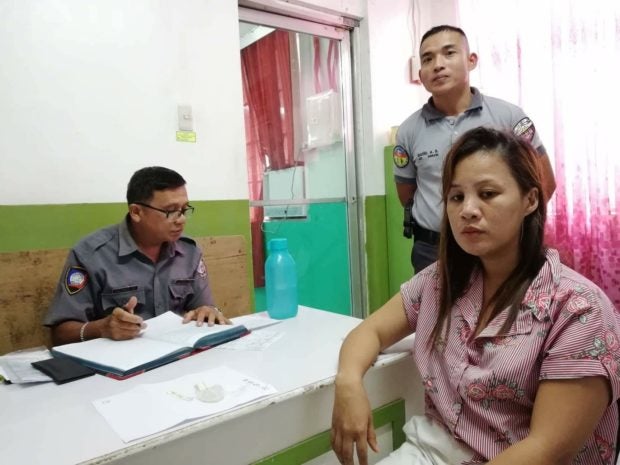 Jail guards arrest Josienen Patenio Perfecio, 30, whose shoulder bag yielded two sachets of suspected shabu during inspection at the Bohol District Jail on Tuesday, June 5, 2018. Together with her young daughter, Perfecio was at the jail to visit her live-in partner, who was imprisoned for illegal drugs two years ago. Leo Udtohan/Inquirer Visayas

TAGBILARAN CITY, Bohol – A woman visiting her jailed live-in partner at the Bohol District Jail (BDJ) was arrested on Tuesday afternoon for attempting to smuggle illegal drugs into the detention facility.

Along with her young daughter, Josienen Patenio Perfecio, 30, a resident of Alturas Habitat Village in Barangay Tabalong, Dauis town, arrived at the BDJ around 12:55 p.m. to visit her live-in partner, Lemuel Guades.

Guades, police said, was a drug peddler arrested in a buy-bust operation two years ago.

According to authorities, Perfecio initially surrendered the new rice cooker she brought to the jail guards for inspection. But she refused to have her shoulder bag inspected despite agreeing to leave it at the security post.

Balani noted that, at first, Perfecio seemed relaxed during the inspection but started to appear nervous and uneasy when they found two sachets of suspected shabu inside her bag.

During tactical interrogation at the facility’s administrative office, jail officers said Perfecio could not give clear answers about the presence of the suspected illegal items in her bag and would at times even appear as if she was out of her mind.

Perfecio was being held at the Tagbilaran City Jail pending the filing of charges against her for possession of illegal drugs.   /kga

Read Next
Kidnapped baby back with mom; sex offender dad arrested
EDITORS' PICK
Being a celebrity isn’t wholly an ‘advantage’ in the election, says Sotto
Acer starts the year off strong with the Aspire Vero National Geographic Edition
Octogenarian jailed for ‘stealing mangoes’ freed after people chip in for bail
Gov’t eyeing COVID-19 tests in pharmacies
Gear up and get ready to play with Yamaha Mio Gear
Over 3 Million worth of prizes to be won at Smart Padala’s SENDali Manalo Promo!
MOST READ
Imelda Marcos trends on Twitter after octogenarian jailed for allegedly stealing mangoes
Help pours in for octogenarian jailed for ‘stealing’ mangoes in Pangasinan
Natural immunity more potent than vaccines during US Delta wave—study
Bongbong Marcos-Sara Duterte tandem adds Zubiri, Gadon, Marcoleta to Senate slate
Don't miss out on the latest news and information.