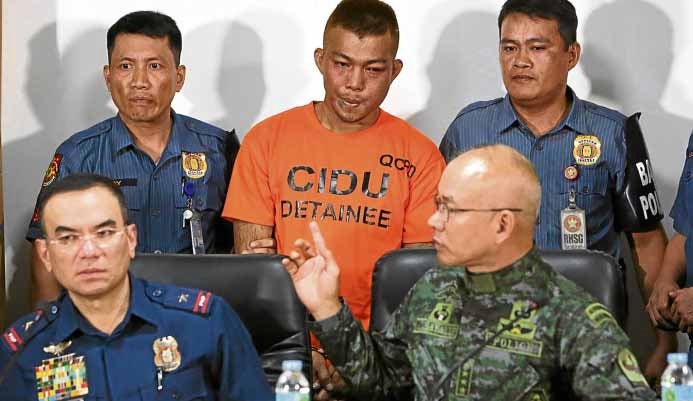 If Prosecutor Madonna Joy Ednaco-Tanyag had survived the knife attack by the man who had robbed her, she would say that she still had faith in the rule of law and justice.

This was what her husband, Crisostomo Tanyag, said on Tuesday after the Quezon City Police District (QCPD) presented the suspect, who was arrested just hours after what police described as a “robbery gone wrong.”

Tanyag, 33, had just bought milk tea at Barangay Vasra along Visayas Avenue on Monday when she was stabbed thrice as she got into her car. She was rushed to East Avenue Medical Center where she died past noon.

By 5:45 p.m., the QCPD had arrested the suspect, Angelito Avenido Jr., at Palayan Dulo, Barangay Culiat.

“If my wife were alive today, I know she would still have faith in our rule of law and justice,” Crisostomo said.

Tanyag was five months pregnant. The couple has a 2-year-old daughter.

Avenido will be charged with robbery with homicide at the Quezon City Prosecutor’s Office.

Avenido said he “accidentally” killed Tanyag as he scuffled with her while trying to take her belongings. He sought forgiveness from her family.

Philippine National Police Director General Oscar Albayalde said the 31-year-old Avenido was a drug-crazed man with a history of violence.

“These are the type of people who we warned will rob and kill anybody just for illegal drugs,” Albayalde said. “He does not probably even know what human rights is.”

Avenido, who was positive for illegal drugs in a test taken after his arrest, had been jailed in General Santos City for over 10 years for violating the Dangerous Drugs Act, police said.

The case against him was later dismissed and he was released on Feb. 14, 2018. Shortly after, he was involved in a fatal stabbing in General Santos and escaped to Manila with his live-in partner on March 30.

One witness, Rogelio Dairo, told police that before the stabbing, Avenido told him to “watch the news later.” Avenido’s family described him as a “problem child,” Albayalde said.

“We don’t want to say that the case is closed because we don’t know yet if he had an accomplice. That’s what we want to find out,” Albayalde said.

Tanyag’s husband, a dentist, said he was unaware of any high-profile cases that she had been working on before her death.

Tanyag was an activist at the University of the Philippines Manila where she studied political science. She was also a reporter and associate editor for the student publication, Manila Collegian, and a member of Sigma Delta Pi Sorority.

She finished law at Manuel L. Quezon University and passed the bar in 2011. She joined the Office of the Ombudsman in March 2016 as a prosecutor and was promoted to assistant special prosecutor in December last year.

Human rights group Hustisya and her colleagues demanded justice for Tanyag, whom they described as “a people’s servant, a staunch human rights advocate, a loving wife, mother and daughter.”

“We condemn the killing of Attorney Donna and we demand a thorough investigation of the incident,” said Hustisya’s public information officer, Cristina Guevarra.

“We refuse to immediately accept robbery as a motive behind the killing. They should also look into her work as assistant special prosecutor at the Office of the Ombudsman, especially that she handles cases of graft and corruption of officials,” Guevarra said.

In a Facebook post, Guevarra called Tanyag a fighter for human rights who made anonymous financial and scholarship assistance and donations to children of victims of extrajudicial killings and forced disappearances and victims of disasters.

In a statement, her UP Integrated School class of 2002 strongly condemned her killing. Her high school classmates described her as a smart, kind and humble friend, a writer-artist and a lawyer who freely gave legal advice and a woman who donated money, even her own breastmilk to the needy.

She was expected back at the Sandiganbayan around 1 p.m. the same day to meet a witness, Sagadal said.

“I hope the [police] are 100-percent sure her case is not job-related,” he said.

Sen. Richard Gordon on Tuesday urged President Duterte to sign into law a bill that would augment the benefits of employees at the Office of the Ombudsman to help the family of Tanyag and others like her.

“I strongly condemn the killing in no uncertain terms. This is a slap once again on the face of justice in this country,” Gordon said in a statement.

Under the retirement benefits program proposed by the bill, Tanyag’s heirs would be entitled to death benefits, or a lump sum of five years’ worth of salary, according to Gordon. —WITH A REPORT FROM DJ YAP