He was just relieved to pave the way for an impartial probe, Albayalde says of new HPG chief
By: Matthew Reysio-Cruz - Reporter / @inquirerdotnet
Philippine Daily Inquirer / 05:04 AM June 06, 2018 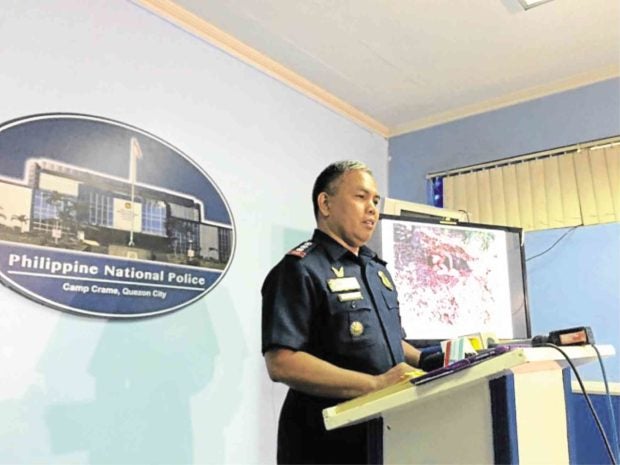 Philippine National Police Director General Oscar Albayalde, who has staked his reputation on zero tolerance for “bad eggs” in the police force, defended on Tuesday the appointment of a relieved police official to head the Highway Patrol Group (HPG).

Chief Supt. Roberto Fajardo, former Northern Police District (NPD) director, was relieved in August 2017 amid widespread outrage over the killing of 17-year-old Kian Loyd delos Santos at the hands of Caloocan City policemen who are under NPD jurisdiction.

Albayalde announced on Monday that Fajardo, who had been on floating status at Camp Crame, had assumed the post of PNP-HPG chief vacated by Chief Supt. Arnel Escobal.

“Remember, when he was director of the NPD, there were no cases filed against him,” Albayalde said on Tuesday.

“He was just relieved to pave the way for an impartial investigation. We saw that he was not actually involved or responsible for the killings in Caloocan,” he added.

Over a month ago, PO3 Arnel Oares, PO1 Jeremias Pereda and PO1 Jeffrey Perez were finally arraigned on charges that they murdered Delos Santos in the Caloocan Regional Trial Court Branch 125. They pleaded not guilty.
Fajardo defended men
Before being relieved in August 2017, Fajardo had vigorously defended the botched police operation.

“They used to call [Kian an] ‘addict’ and ‘pusher.’ Now that he is dead, he suddenly became [a good boy],” he told reporters then.

Asked whether Fajardo’s appointment was indicative of a growing trend in which fired officials were being “recycled” under President Duterte’s administration, Albayalde said he would not second guess Mr. Duterte.

“That’s up to the President to decide,” Albayalde said. “What’s important to him is that he sees people [who are] really willing to give wholehearted service.”

His own appointment as PNP chief was the “best example” of the President’s commitment to appoint hardworking officers, he added.

“Despite not knowing me, he saw [my] performance and merit. That’s always the basis,” Albayalde said.