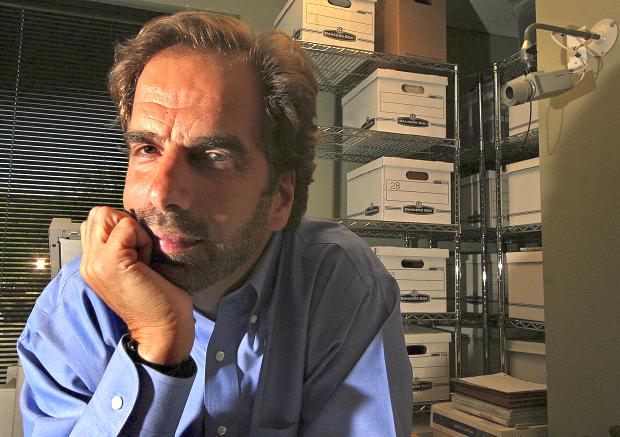 In this photo, taken Friday, June 29, 2007, Dr. Steven Pitt poses in Scottsdale, Arizona. Authorities say the fatal shootings of two paralegals in a Phoenix suburb are related to the killing of Pitt, a well-known forensic psychiatrist in Phoenix, and police are investigating if a fourth homicide is related. (Photo by JULIO JIMENEZ / East Valley Tribune via AP)

SCOTTSDALE, Arizona — A hunch from a retired detective helped lead police to a man suspected of shooting six people to death in the Phoenix area, some of whom were connected to his divorce, authorities said after the assailant killed himself with officers closing in.

A round-the-clock investigation that began late last week led police Monday to an extended-stay hotel in suburban Scottsdale where 56-year-old Dwight Lamon Jones was staying. As officers approached, they heard gunfire and found his body.

Jones’ victims included a well-known forensic psychiatrist who testified against him in court in 2010, two paralegals who worked for the law office that represented the suspect’s wife, a marriage-and-divorce counselor who was apparently targeted in a case of mistaken identity and another man and woman who have not been identified, authorities said.

In an unexpected twist, the suspect’s ex-wife, Connie Jones, said her current husband, a retired police detective, made the connection between her divorce and the crime scenes and notified police of his suspicion Saturday night.

Connie Jones said in a statement that her ex-husband was a “very emotionally disturbed person.”

Jones was arrested in May 2009 at his family’s Scottsdale home on a domestic violence charge after his wife said he backed her against a wall, hit her in the face and threatened to kill her, according to court records. The arrest was cited by his then-wife when she filed for divorce.

“Personally, I have feared for my safety for the past nine years. I cannot express the emotions I feel for the innocent families touched by this senseless violence,” Connie Jones said.

“We started to see that Mr. Jones was visiting them in an effort to right some wrong based on what we could see,” said Rich Slavin, assistant police chief in Scottsdale.

The slayings began Thursday with the fatal shooting of Dr. Steven Pitt, who, according to court records, had evaluated Jones and testified in 2010 that he had anxiety and mood disorders and symptoms of a paranoid personality.

Pitt said Jones did not conform to social norms and acted impulsively and aggressively. He lacked remorse and close friends and required excessive admiration, the records said.

The testimony was cited in the couple’s November 2010 divorce, which granted Jones’ wife sole custody of their now 21-year-old son.

“This is not a success story, but it’s a story that has closure,” Maricopa County Sheriff Paul Penzone said.

The 59-year-old psychiatrist was well known in his field and assisted in high-profile murder cases, including the JonBenet Ramsey mystery in Colorado and a notorious Phoenix serial killer investigation.

Paralegals Veleria Sharp, 48, and Laura Anderson, 49, worked at the law office that represented Jones’ wife. Police believe Jones may have been targeting the attorney, but she was not present Friday when Jones went to the office in downtown Scottsdale.

Sharp was shot in the head but ran out of the office to get help before collapsing on the street, police said. She was pronounced dead at a hospital.

Counselor Marshall Levine, 72, appears to have been mistaken for someone else who once occupied the same office. At one time, the space was used by a counselor who saw Jones’ son as part of the divorce. Levine, who took over the space, was not involved in the divorce case.

Police would not speculate why Jones tracked down people connected to his divorce so long after it happened. They say he had been living in extended-stay hotels for the past nine years.

Analysis of shell casings found at Pitts’ office, the law firm and Levin’s office confirmed that the victims were killed with the same gun, police said.

Jones’ DNA was found on one of spent casings. And traffic cameras showed a vehicle fitting the description of Jones’ gold Mercedes near the law firm 30 minutes before the double killing on Friday, police said.

The suspect has also been linked to two additional killings in Fountain Hills, an affluent suburb in the northeastern corner of metro Phoenix. The man and woman found dead inside the home have not been named publicly.

Some neighbors who were home on Monday afternoon stepped out to observe the police presence that remained on the street, which is usually a serene area.

As police shared new details of the case, several hundred people crowded into a chapel at a mortuary in Scottsdale to honor Pitt with music, humorous stories and a Hebrew prayer of mourning.

He was remembered as a perfectionist in his work on major cases and a loving man who doted on his fiancee and family members. Phoenix police Lt. Bryan Chapman, who had become a close friend during their work on criminal cases, said Pitt volunteered countless hours to help investigate many lesser known crimes.

“He was the hardest working person I ever met,” Chapman said.

Read Next
Sister Fox insists she did not violate conditions of her stay in PH
EDITORS' PICK
10 Filipinos positive for COVID-19 in UK, 7 in Ireland — envoy
Nograles: Cabinet members to donate 75% of monthly salary to aid COVID-19 fight
Quick chat with Nicole Andersson: ‘You really don’t need much to be happy’
IATF to LGUs: Issue ordinances vs attacks on frontliners, COVID-19 patients
Diokno to Duterte: OK to make fun of buck tooth, but focus on people’s needs first
Robredo spox thanks Duterte for defending VP’s efforts vs COVID-19
MOST READ
Coronavirus hotbed Rizal to shut borders on April 6
Gov’t mulling quarantine period extension of 15-20 more days
ADB warns PH against prolonged lockdown
Sotto on Isko Moreno’s call: We do our job without the media following our every move
Don't miss out on the latest news and information.