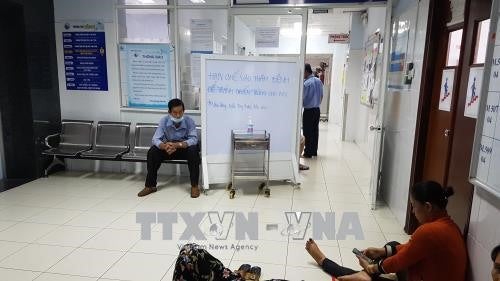 Tu Du Hospital has limited the number of patients in the endoscopy department to reduce the risk of swine flu transmission. Viet Nam News/Asia News Network

HCM CITY — The Ministry of Health has issued a number of recommendations in light of a recent incident in which some 16 patients, their relatives and health officials at Tu Du Hospital in HCM City on Saturday tested positive for swine flu (A/H1N1), according to the city’s Preventive Health Center.

The ministry advises people to pay more attention to personal hygiene, wash hands frequently with soap and use masks as well as clean up the surroundings of their houses and offices.

When symptoms such as fever, coughing and sore throats are detected, local medical facilities should be informed. The elderly, children and pregnant women should avoid contact with people with flu symptoms. It is also recommended that people only take medicine prescribed by doctors and nothing else.

The virus A/H1N1 is known to be able to survive for 24 to 48 hours outside and eight to 12 hours in clothing items. It may also survive up to four days in water bodies such as swimming pools and small water puddles.

The incident detected on May 30 involved a woman from the Mekong Delta province of Tien Giang. She was treated at the hospital’s endoscopy department with symptoms of fever.

At 12pm on the same day, five to seven more people at the hospital reported fever and body aches. The number continued to increase to 23 by the end of the day.

Of the 23, 18 were treated at the department. The remaining were health officials who went home when their shift ended, while several patients and their relatives were discharged from the hospital, according to Dr Nguyen Ba My Nhi, the hospital’s deputy director.

The hospital informed the Preventive Health Centre and the city’s Department of Health and worked with the city’s Hospital for Tropical Diseases to take tests and treat patients with fever and those suspected of exposure.

The hospital also isolated patients at the hospital and disinfected areas in the endoscopy department to stop the spread among pregnant women there.

Of the patients, the ones who were discharged from the hospital were allowed to go home and receive supervision from the Preventive Health Center if they reside in the city.

Patients from provinces were reported to the city’s Pasteur Institute, which is in charge of working with health authorities in southern provinces to control disease.

Dr Truong Huu Khanh, head of the city’s Paediatrics Hospital 1’s infectious and nervous diseases department, told Viet Nam News that people should receive a vaccine against influenza and wash their hands thoroughly and regularly to reduce the risk of flu infection as the A/H1N1 virus is circulating in humans as a seasonal flu virus.

Pregnant women infected with the swine flu are at a higher risk of complications such as pneumonia and miscarriage, Khanh said.

As of Saturday, no new incidences had been reported at Tu Du Hospital.

Read Next
Will Trump-Kim summit discuss human rights issues?
EDITORS' PICK
Acer starts the year off strong with the Aspire Vero National Geographic Edition
4.7 million Filipinos have received booster shots, but that’s still a ‘low’ number – Galvez
Over 3 Million worth of prizes to be won at Smart Padala’s SENDali Manalo Promo!
‘Not yet the end’: Lawyer says Marcos Jr’s DQ cases to take lengthy process
Omicron now shows up in 90% of samples sequenced – Duque
The best of bayside and city living at SMDC’s Sail Residences
MOST READ
Drug lord Espinosa tried to escape through air vent at detention facility – NBI
In Batanes, octogenarian dies of COVID-19
When to get boosters after positive COVID test
Marcos Jr. visits Cebu, stands as ‘ninong’ to mayor’s son
Don't miss out on the latest news and information.