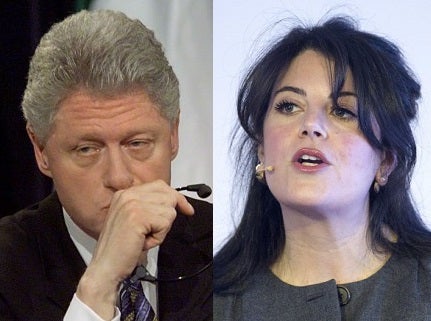 Former US President Bill Clinton (left) says he does not need to personally apologize to former White House intern Monica Lewinsky (right) over the sex scandal between them while he was still US Chief Executive. AFP FILE PHOTOS

WASHINGTON, United States — Former US president Bill Clinton said he had not spoken to Monica Lewinsky since the revelation of their affair and that while he had apologized to her publicly he did not think a private apology was necessary at this point.

In a testy interview with NBC’s “Today” show aired on Monday, the 71-year-old Clinton was also asked for his thoughts on the #MeToo movement.

The 42nd US president is on a book tour to promote a new thriller, “The President Is Missing,” co-written with best-selling author James Patterson.

But it’s his time in the Oval Office — specifically his affair with Lewinsky — that is drawing scrutiny.

“I apologized to everybody in the world,” Clinton said when asked if he had apologized to Lewinsky for his affair with the then 22-year-old White House intern.

Asked if he felt he should apologize privately to Lewinsky, Clinton said “No, I do not.”

“But I did say publicly on more than one occasion that I was sorry,” he said. “That’s very different. The apology was public.”

“It’s way overdue,” he said. “It doesn’t mean I agree with everything.

“I still have some questions about some of the decisions which have been made,” he said without elaborating.

‘Tried to do a good job’

Asked whether in light of #MeToo he should have resigned instead of fighting impeachment, Clinton said: “I think I did the right thing. I defended the Constitution.

“This was litigated 20 years ago,” he said. “Two-thirds of the American people sided with me.

“I’ve tried to do a good job since then with my life and with my work,” he said.

“And nobody believes that I got out of that for free,” Clinton added. “I left the White House $16 million in debt.”

Clinton also said the press has “conveniently omitted” a number of facts regarding the Lewinsky affair “to make the story work.”

“Partly cause they’re frustrated because they’ve got all these serious allegations against the current occupant of the Oval Office and his voters don’t seem to care,” he said.

Asked if President Donald Trump has been “given a pass” regarding claims of sexual harassment made against him, Clinton said, “No, but it hasn’t gotten anything like the coverage that you would expect.”

Lewinsky said in an article published in Vanity Fair in February that she had been reexamining her affair with Clinton through the “new lens” of the #MeToo movement and has concluded it constituted a “gross abuse of power.”

“Now, at 44, I’m beginning (just beginning) to consider the implications of the power differentials that were so vast between a president and a White House intern,” she wrote. “I’m beginning to entertain the notion that in such a circumstance the idea of consent might well be rendered moot.

“He was my boss. He was the most powerful man on the planet,” Lewinsky wrote. “He was 27 years my senior, with enough life experience to know better.

“I now see how problematic it was that the two of us even got to a place where there was a question of consent,” she said. “Instead, the road that led there was littered with inappropriate abuse of authority, station, and privilege.”

“But it’s also complicated. Very, very complicated,” she said, acknowledging that she had been looking for “intimacy” and was not seeking now to make excuses for “my responsibility for what happened.” /cbb