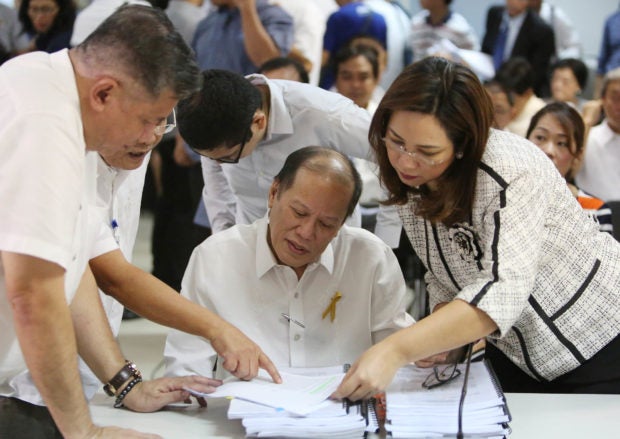 Former President Benigno Aquino III and Janette Garin, Aquino’s health secretary, attend a hearing at the Department of Justice on charges filed against them for the Dengvaxia scandal. —MARIANNE BERMUDEZ

The specter of suffering the same fate as detained Sen. Leila de Lima is not lost on former President Benigno Aquino III as he urged the Department of Justice (DOJ) on Monday to junk the criminal complaint brought against him by President Rodrigo Duterte’s rabid supporters over the P3.5-billion Dengvaxia mess.

“The only weapon we have is the truth and with the help of God, we will overcome these challenges,” Aquino told a press briefing after attending the preliminary investigation at the DOJ.

Assisted by lawyers, Aquino appeared before the DOJ panel of prosecutors, along with former Health Secretary Janette Garin and former Budget Secretary Florencio Abad to personally submit their counter-affidavits.

In a 27-page counter-affidavit, Aquino maintained that the complaint should be tossed out for the supposed failure of the Volunteers Against Crime and Corruption (VACC) and Vanguard of the Philippine Constitution Inc. (VPCI) to present “sufficient bases in fact and law” to prove their allegations.

He said his and his Cabinet’s decision to launch the dengue immunization program was “in accordance with law and the pertinent rules and regulations, and animated solely by good faith.”

“At the outset, I categorically deny all of the complaint’s factual allegations, particularly regarding my purported illicit involvement and participation in the commission of the offenses charged,” the former President said.

They were accused by the VACC and the VPCI of graft, malversation of public funds and multiple homicide and physical injuries through negligence for the supposed Dengvaxia-related deaths of children.

Aquino defended his Cabinet officials who approved and carried out the dengue immunization program, as he denied that it was designed to bolster the candidacies of his colleagues in the Liberal Party in the May 2016 elections.

“We should ask the question, ‘Is it all right to disregard the dangers posed by dengue to the people because we’re having an election?’ Was it rushed? I don’t know how anyone could claim it was rushed because we have had antidengue programs even before we came in,” he said.

Asked if he was concerned that he might end up in jail like De Lima, Aquino replied: “I cannot avoid thinking about that.”

Leaders of both VACC and VPCI were known supporters of the President, many of whom had been appointed to key government posts.

More than the allegations thrown at him, the former President said he was concerned about reports that a number of parents had been refusing free immunization for other diseases for their children due to the panic caused by the Dengvaxia scandal.

“Some children had died of [other] diseases because of fear-mongering even if up to this day, there had been no direct evidence to prove that Dengvaxia may cause death,” he said.

In addition, Aquino argued that the criminal complaint against them should be dismissed outright due to forum-shopping, noting that similar complaints were filed by the same groups in the Commission on Elections and the Office of the Ombudsman.