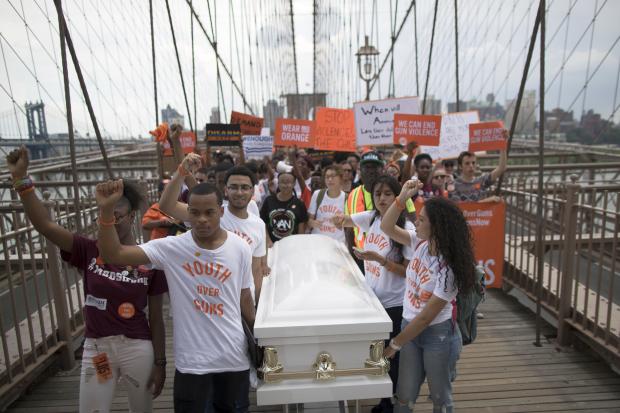 Demonstrators carry a coffin over the Brooklyn bridge during a march and rally against gun violence, Saturday, June 2, 2018, in New York. Youth Over Guns, a gun violence prevention organization in New York City, lead a march across the Brooklyn Bridge to call for youth empowerment and investment in urban communities to end gun violence. (Photo by MARY ALTAFFER / AP)

NEW YORK — Thousands of demonstrators have marched across New York’s Brooklyn Bridge in a protest against gun violence.

A student-led group called Youth Over Guns organized Saturday’s protest. The group formed after the deadly mass shooting in Parkland, Florida, in February.

The protesters marched across the bridge and then rallied in lower Manhattan. Most wore orange to show their support for gun violence awareness.

The march was one of several taking place around the country to protest gun violence and urge lawmakers to pass gun restrictions.

TAGS: US gun controls, US protest vs guns, Youth Over Guns