Jardeleza to new lawyers: Stay humble, have room for empathy 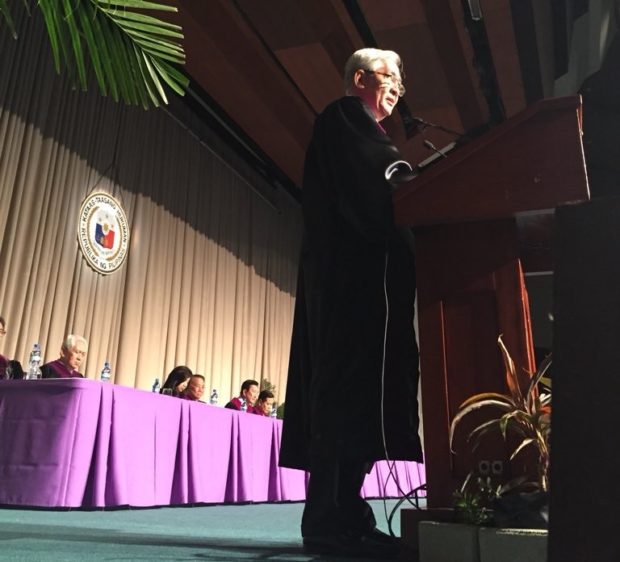 Supreme Court Associate Justice Francis Jardeleza said being humble and having empathy have been helpful when he was starting a career in the legal profession.

Jardeleza said those two distinguishing qualities were distilled from the lessons shared to him by his mentors, whom he include the late Senators Edgardo Angara and Raul Roco.

Sharing his experience with Angara, he said he submitted what he thought was a well-written amicus brief for a labor case but after the senior Angara has rewritten it, it was barely recognizable but “was awesome, well organized, succinctly written.”

“The only things that survived from my draft were the case law I researched. Repeat that humbling experience many times over, under different partners and mentors, and these instilled in me a profound acceptance of how little I knew, and how much more I had to learn,” Jardeleza said. He was the first to deliver the inspirational message to the 1,724 successful Bar examinees who took their oath Friday at the Philippine International Convention Center (PICC).

He said Roco was more blunt when he told him “hindi pwede dito ang mayabang” [one who is so full of himself is not allowed here (referring to the legal profession)].”

Jardeleza took his case to the Supreme Court and asked that it compel the Judicial and Bar Council (JBC) to include him in the shortlist. Seven justices voted in favor of Jardeleza’s inclusion to the shortlist.

“Never forget your roots and do not let success get in your head,” Jardeleza said.

“Always remember this day as your inspiration, the day when you were starting, when you needed people, and had lots of room in your heart for empathy,” he added.

He told the new lawyers that if ever they become a part of the Supreme Court, feel free to tell him if his advice is either “havey” (it worked out)  or “waley” (not effective). /jpv

De Castro to new lawyers: Hard work, not politics, will get you ahead