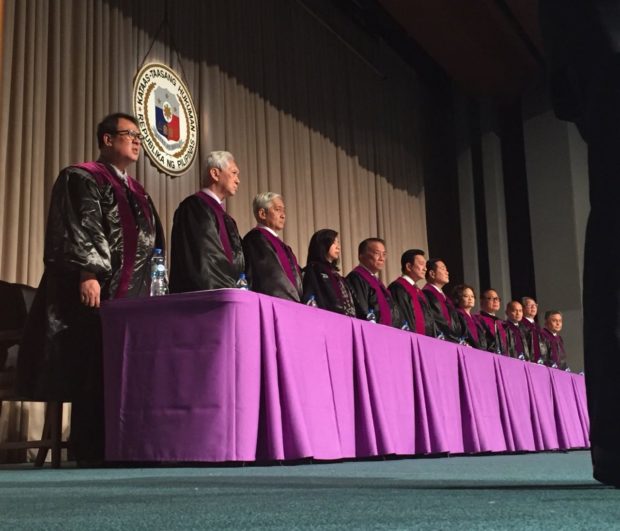 In his speech, Bersamin said the new lawyers must “always detest and reprove a fellow lawyer who joins a public demand for disrespecting the courts and their rulings.”

Bersamin said when “unreasonable resenters and intolerant skeptics exceed the boundaries of propriety and orderliness, they directly threaten the institution of the courts and erode fealty to the Rule of Law.”

“At that hour when disrespect for the courts and their judgment becomes rampant, and when the very ramparts of our constitutional democracy are assailed, lawlessness and disorder may badly tear the moral fabric of the nation. Then, we really need the leadership of the lawyers. Then is the time for lawyers like you to come out openly to defend the institution of the courts,” Bersamin said.

He said, regardless of the stand, lawyers’ priority is to protect the institution otherwise “the day of anarchy and lawlessness may be upon us before we know it, and it will be too late.”

The Supreme Court has been at the receiving end of criticisms following its May 11, 2018 decision granting the quo warranto petition that ousted the chief justice, Maria Lourdes Sereno.

Voting 8-6, the high court declared that Sereno is not qualified to sit as chief justice and declared the position vacant.

Bersamin is one of the eight magistrates who voted in favor of the quo warranto petition.

Speaking before the new lawyers, Bersamin clarified that he does not mean that lawyers should not criticize the courts.

“You must really do so at times, or even a lot of times, because that is your right as citizens. But we must agree at least that the right to speak in criticism cannot be unbounded,” Bersamin said.

He said, “always deal with the courts, your clients, adversaries and fellow lawyers with the highest degree of professionalism and civility.”

After his speech, Bersamin then presented the new lawyers and petitions to the Supreme Court to admit the 1,724 successful candidates of the 2017 Bar examination as members of the Integrated Bar of the Philippines (IBP).

After the oath, the Bar passers will then sign in the Roll of Attorneys before they can officially use their title. /jpv