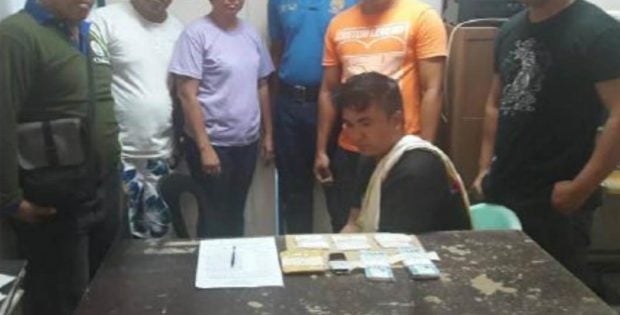 Rey Jacquese Cesar Araña, 23, a resident of Barangay Poblacion in Panglao, Bohol, was arrested in a buy-bust operation on Frida, June 1. A suspected shabu worth P2.25 million was seized from Araña, a newly identified peddler. Photo courtesy: PNP-Panglao

Rey Jacquese Cesar Araña was detained at the Panglao police station pending filing of charges for violating the Comprehensive Dangerous Drugs Act of 2002 (Republic Act No. 9165) against him.

He was allegedly caught with three big packs of shabu weighing about 150 grams worth P2.25 million during a buy-bust operation about 2 a.m. on Friday along the road near Araña’s residence.

PO1 Mark Villanuev Yana, desk officer of Panglao police station, said Araña was a new player on Panglao Island, a prime tourist destination in Bohol, who went into the drug trade this year.

“His clients are mostly from Panglao,” said Yana. “He usually sold drugs in big volumes.”