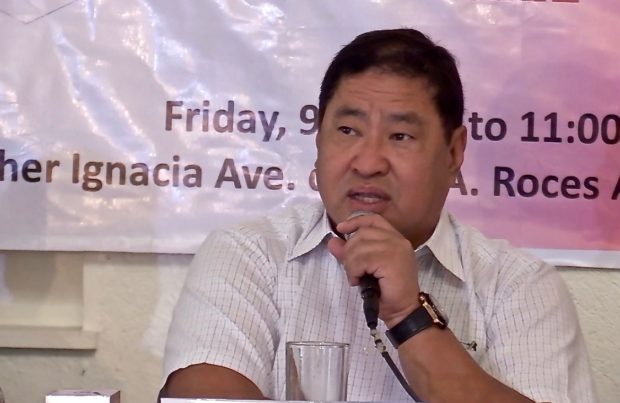 House justice committee chairman Rep. Reynaldo umali says he is elated that the Senate failed to adopt its resolution, expressing “the sense of the Senate to uphold the Constitution on the matter of removing a chief justice from office,” during a press conference on Friday, June 1, 2018, in Quezon City. (Noy Morcoso/INQUIRER.net)

House justice committee chair Rep. Reynaldo Umali said on Friday he is elated that the Senate failed to adopt the resolution urging the Supreme Court (SC) to review its decision to oust Chief Justice Maria Lourdes Sereno through a quo warranto petition, saying it could be a “violation of separation of powers” of the three branches of government.

“Natutuwa ako na hindi po ipinasa o napagbotohan at walang action ang Senado. And if they did (adopt the resolution), that is a a violation of separation of powers of the State kasi clearly, may jurisdiction ang SC dito sa quo warranto kasi it is also allowed in the Constitution,” Umali said at the News and Nuances Kapihan at Almusan (Nanka) media forum.

The high court, voting 8-6, granted the quo warranto petition that sought to remove Sereno from office. Sereno’s camp had already filed a motion for reconsideration on the case.

READ: Sereno appeals to SC: Do what is right and just

The Senate tackled Senate Resolution No. 738 after midnight on Thursday but failed to adopt it.

Senate Resolution No. 738 expresses “the sense of the Senate to uphold the Constitution on the matter of removing a chief justice from office.” It was signed by 14 of the 23-member Senate.

Senators Panfilo Lacson and Francis Pangilinan had a heated debate over the intention of the resolution during deliberations.

READ: Lacson argues with Pangilinan: Is Senate ‘encroaching on powers of SC?’

Despite Senate’s failure to act on the resolution, former Senate President Aquilino Pimentel III said he would remain firm with his decision to support the call.

“I did not sign to influence the court, I signed it to express the sense of the Senate,” Pimentel said.