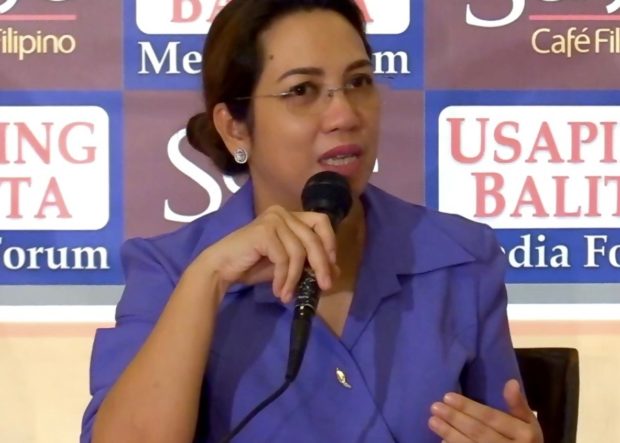 Former Health Secretary Janette Garin dismissed as a “huge lie” on Thursday the alleged diversion of a P10.69-billion fund from the Philippine Health Insurance Corp. (PhilHealth) to the Department of Health (DOH) because the fund was “nonexistent” in the first place.

Garin addressed the issue of the alleged diversion of the fund meant for senior citizens to the construction of rural health clinics in 2015 after PhilHealth lodged graft complaints against her and former PhilHealth president Alexander Padilla.

“First of all, it is not true that the P10.69 billion from PhilHealth was diverted to the DOH because there is no such thing as P10.6 billion that went to PhilHealth,” Garin said in Filipino at the Serye media forum.

The former health chief said the P10.69 billion was exclusively for PhilHealth and could only be used by the DOH in case of excess tax collection, which, she said, did not happen.

Garin lamented that the issue was being used as a “platform” by “those who have ambitions to be appointed by President Rodrigo Duterte.”

“They told me they had P10.6 billion in the GAA (General Appropriations Act). Upon perusal, DBM (Department of Budget and Management) said there were conditionalities for its release accompanied by a menu for various health services,” she said.

PhilHealth, she said, on Wednesday, is looking for somebody to blame “because of their current dismal situation.”

“Two things here: One, culprits of PhilHealth fraud and bloated financials and income are looking for a scapegoat on the real reasons behind their disastrous financial situation; two, some people interested in government posts are using PhilHealth to be a takeoff for media exposure and subsequent appointments,” she said.

Garin said that when she became chair of PhilHealth, they curbed fraud and stopped payments to questionable transactions.

“There were a lot of questionable things in the way the GOCC (government-owned and -controlled corporation) was being managed. Unfortunately, this was not sustained,” Garin said.

She said the DOH and PhilHealth were informed by the current DBM that the P10.6-billion claim was actually unprogrammed fund, thus they did not have legal basis to justify its release to PhilHealth.