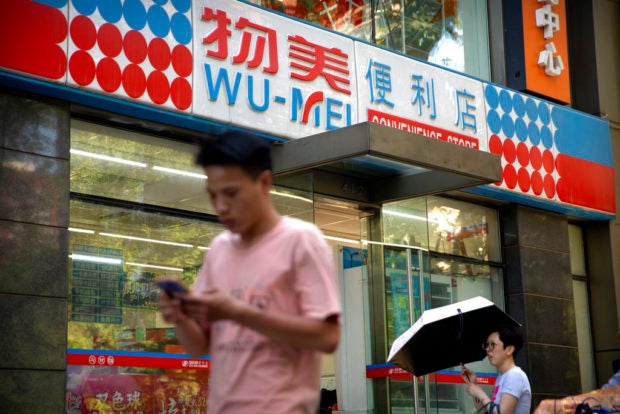 People walk past a Wumei convenience store, part of the Wumart Stores retail company, in Beijing, Thursday, May 31, 2018.  AP

BEIJING — China’s supreme court threw out a retail tycoon’s fraud conviction on Thursday in an unusual show of leniency toward entrepreneurs amid a string of high-profile detentions that has rattled the Chinese business world.

The Supreme People’s Court ruled that while Zhang, a computer scientist who studied at Stanford University and founded Wumart in the 1990s, violated rules in applying for the subsidies, he did so unintentionally and his company was eligible to receive them.

Zhang and another executive who was convicted had no “subjective intention” to commit fraud, the court said. It said their convictions were a “misapplication of the law and should be corrected.”

The ruling was a rare success by a high-profile defendant in the midst of a marathon anti-corruption crackdown led by President Xi Jinping.

It reflected the ruling Communist Party’s desire to “strengthen the protection of the legitimate rights and interests of entrepreneurs,” said a Supreme Court official quoted by the website of the Shanghai newspaper The Paper.

In a possible effort to reassure entrepreneurs about their status in the state-dominated economy, the unidentified official acknowledged they face uncertainty about evolving rules and sometimes need to make unorthodox arrangements.

“In some places, there has been an unfair and unreasonable treatment of private enterprises,” the official was quoted as saying. The official said when authorities find “irregular practices” they should be examined in a “developmental perspective.”

A series of Chinese businesspeople have been prosecuted or detained for questioning since 2016 about possible offenses including fraud, embezzlement and bribery.

On Wednesday, a lawyer for the imprisoned founder of China’s biggest privately owned insurance company said he will appeal an 18-year prison sentence on fraud charges. Wu Xiaohui of Anbang Insurance, which owns New York City’s Waldorf Hotel, was convicted of improperly raising billions of dollars from investors and diverting company to his own use.

The founder of a Shanghai-based company that was buying a stake in Russia’s biggest oil producer, Rosneft, was detained in March, according to news reports. A Chinese-born Canadian businessman disappeared from Hong Kong in early 2017 and news reports say he might have been abducted by mainland police for possible trial.

Zhang was accused of improperly obtaining 31.9 million yuan ($4.9 million) from a government program for a logistics and information management project. Prosecutors said only state-owned companies were eligible and Zhang colluded with a subsidiary of a government enterprise, China Chentong, to obtain the money.

The supreme court said the rules had changed by the time Wumart applied and private companies were eligible.

“It is in accordance with the industrial and development policies of that time,” the court said.
It gave no indication why a lower court that upheld Zhang’s conviction in 2009 failed to notice the rule change that would have freed him.

Zhang stepped down as chairman of Wumart’s parent company after being detained in 2006.
The supreme court also overturned Zhang’s conviction on charges he and other investors improperly used 40 million yuan ($6.1 million) from a customer’s account at an insurance company to trade stocks.

The facts of that case were unclear and “lacked sufficient evidence,” the court said. /ee