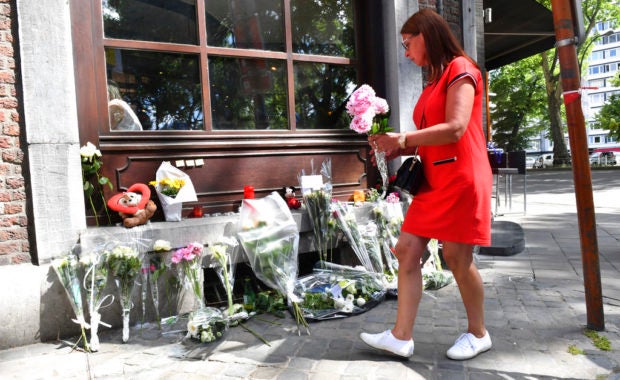 A woman lays flowers on a memorial at the scene of a shooting in Liege, Belgium, Wednesday, May 30, 2018. (AP Photo/Geert Vanden Wijngaert)

BRUSSELS  —  Belgians has taken pause to remember the three victims of the Liege attacks, honoring them with solemn moments of silence or laying flowers at memorials.

The main ceremony was in Liege itself where Prime Minister Charles Michel and Interior Minister Jan Jambon joined local dignitaries and police to honor the two policewomen who were stabbed and shot to death and the aspiring teacher who was killed in his car.

In Brussels and Antwerp too, policemen and security officials gathered to mourn the loss of their two colleagues.

In Liege, resident Melissa Lamny attached a flower to a post close to the shooting scene.

Lamny said “that’s touched me really bad, because that is where I live and every morning I am scared that something like this will happen and every day it happens a little bit closer to home.”

A Belgian federal magistrate says the Liege attack which left three dead are considered “terrorist murder” and the investigation now centers on whether the attacker acted alone.

Wenke Roggen said that the attacker shouted “Allahu akbar,” the Arabic phrase for God is great, several times during the shooting rampage before he was shot down by a group of police officers.

Roggen said the rampage is being treated as terrorism given the way the attacker acted, which she says resembled Islamic State calls via video to attack police with knives and steal their weapons, the fact that he yelled Allahu Akbar and was in contact with radicalized people.

The attacker, identified as Benjamin Herman, killed two female police officers by stabbing them from behind, stealing their service weapons and shooting them. He also killed a passer-by in a car before being shot dead by police in a shootout.

Read Next
Hotpot restaurants in China shut down for unhygienic practices
EDITORS' PICK
ANALYSIS: SBP’s problem is way bigger than its coach
Summit breakthrough – EJ Obiena is the first Filipino to win in the World Athletics Championship
House energy committee chair Arroyo bats for cheap electricity
Bongbong Marcos: Fidel Ramos was a symbol of stability after ‘tumultuous events’ in 1986
How Malaysia ended up owing $15 billion to Sulu sultan’s heirs
Abra earthquake aftershocks rise to 2,492
MOST READ
How Malaysia ended up owing $15 billion to Sulu sultan’s heirs
Kelsey Merritt and Jared Leto spotted together in Italy, spark dating rumors
Cesar Montano got all children present on 60th birthday: ‘Can’t be more happy’
Furigays ‘surprised’ by Ateneo shooting suspect’s ‘not guilty’ plea
Don't miss out on the latest news and information.