France had a million fewer smokers in 2017—ministry 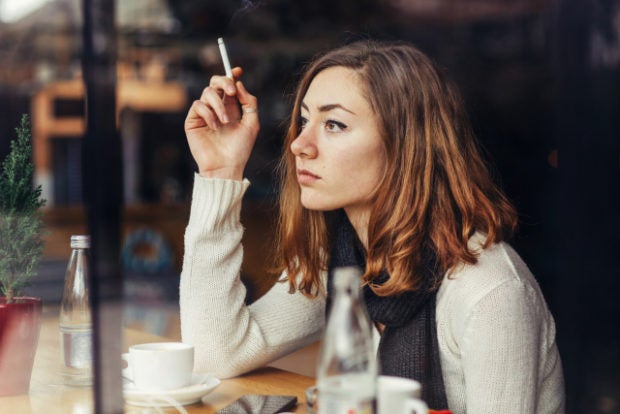 France had a million fewer daily smokers in 2017 over 2016, the health ministry said Monday, thanking the dissuasive power of higher tobacco taxes.

In a special report on tobacco use in a country once synonymous with smoke-filled Parisian street cafes, the ministry did not mention whether electronic cigarettes have had any impact on the apparent trend.

It cited figures from a random representative survey of 18- to 75-year-olds living in France last year.

This represented a decline of a million daily smokers in the space of a year, said the report.

The ministry pointed out that tobacco kills about 200 people in France every day, some 73,000 per year.

Globally, the World Health Organization (WHO) says tobacco kills up to half of users — more than seven million people every year.

In 2016, according to the latest WHO data, over 1.1 billion people aged 15 and older — about a seventh of the global population — were smokers.

The number was unchanged from 2015.

Tobacco use shows signs of a slow decline globally, though in some countries — especially developing ones — there is a rise.

Smoking has been linked to several types of cancer, heart disease and stroke.

The decline in French smokers was particularly steep among low-income puffers, said the ministry.

Buzyn intends to raise the price of a packet of cigarettes to 10 euros ($11.6) by 2020, up from almost eight today after a series of hikes in recent years.

The report made no specific mention of any role for the massive global switch, also observed in France, from tobacco to e-cigarettes that emit a tarless vapor that users inhale instead of smoke.

At the press conference, Francois Bourdillon of France’s public health agency did note that e-cigarettes were “clearly” the smoking cessation aid of choice.

The survey found 2.7 percent of people in France were daily e-cigarette users in 2017. NVG

Read Next
Fired OGCC chief Jurado: I respect the President’s decision
EDITORS' PICK
Over 3 Million worth of prizes to be won at Smart Padala’s SENDali Manalo Promo!
Gear up and get ready to play with Yamaha Mio Gear
Acer starts the year off strong with the Aspire Vero National Geographic Edition
If elected VP, Sara Duterte will push for mandatory military service for all Filipinos
Senate bill seeks to penalize employers requiring employees to work during rest hours
Marcos-era elections: Not what his son signed up for
MOST READ
Jose Manalo’s son Benj pays tribute to late mother: ‘You’re a testimony of God’s love’
‘Sampal sa gobyerno:’ Drilon wants unvaxxed PAO chief barred from working
Vice mayor slams Vico Sotto for turning Pasig into a ‘puro palabas’ city
Bongbong-Sara tandem names 7 candidates in initial senatorial slate
Don't miss out on the latest news and information.