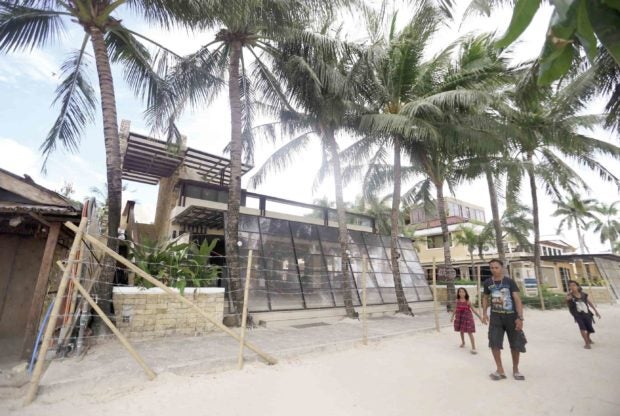 DESERTED Only residents remain in Boracay as establishments catering to tourists are closed for the six-month rehabilitation of the resort island.—LYN RILLON

Pork, fresh fish and even vegetables have become unaffordable for them since Boracay Island was closed to tourists on April 26 for a six-month rehabilitation.

“We are heavily indebted to our neighborhood store. We don’t know how we will repay it and for how long can we get food items on credit,” she told the Inquirer.

Abañera, 32, worked as a cook in a restaurant and sold souvenirs to tourists.

But the closure of the island has left her and husband, a construction worker, without any source of income.

Every day, they struggle to meet the needs of their family with four children aged 7, 5, 3 and 7 months.

Abañera has enrolled in a cash-for-work program of the Department of Environment and Natural Resources (DENR).

She will receive the regional daily minimum wage of P323.50 for a maximum of 30 days or a total of P9,705. But she said this would not be enough for a family of six for six months.

Around 30,000 regular and informal workers have been severely affected by the closure of the island to tourists.

Many returned to their hometowns after establishments suspended their operations. Others continue to work, although on reduced hours and on rotation basis.

A few business owners who have continued the operations of their establishments are not sure if they could sustain operations for the next months.

“We want to remain open so our workers can still earn but our losses are piling up,” a restaurant owner said.

Among those hardest hit are workers who live on the island and those who have no regular income, including vendors, drivers, tour guides, masseuses and manicurists.

Aside from the cash-for-work program of the DENR, the Department of Social Welfare and Development has released P18.68 million to 7,693 affected workers as of May 18, mostly in transportation allowance to those who opted to return to their hometowns to find work.

The Department of Labor and Employment will also grant assistance to workers affected by the closure.

Regular workers who were retained, retrenched or whose employment were suspended will receive 50 percent of the regional daily minimum wage or P4,205.50 (26 working days per month) for six months.

Those who do not have regular salaries will receive 25 percent of the daily minimum wage or P2,102.75 per month for three months.

We Are Boracay, an organization of mostly vendors, tour guides, masseuses, manicurists, photographers, cooks and “commissioners” (those who facilitate hotel bookings for walk-in tourists for a commission), is appealing for additional and faster release of government assistance.

“The government’s assistance is too little and not enough for our basic needs. It also cannot accommodate all those needing help,” said Yolanda Alejado, one of the leaders of We Are Boracay.

A vegetable and pork vendor, Alejado has no other source of income after hotels, resorts and restaurants stopped operating.

“It’s very painful for us. I can only cry silently when I cannot provide for the food that my children ask,” she said.

Environment Secretary Roy Cimatu said the implementation of the rehabilitation of the island is on schedule, especially on the clearing of illegal structures along the main road and those encroaching on the 30-meter beach easement.