With a roar, flash flood smashes into a Maryland community 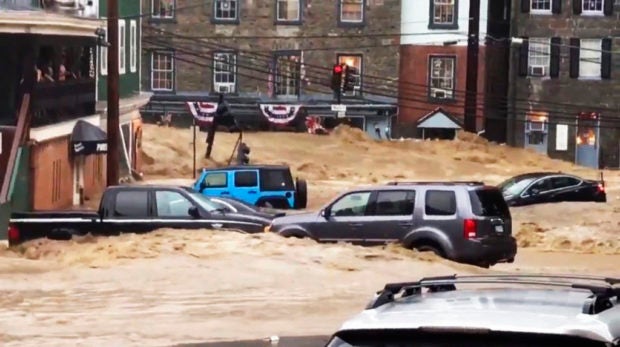 Water rushes through Main Street in Ellicott City, Md. on Sunday, May 27, 2018. Flash flooding and water rescues are being reported in Maryland as heavy rain soaks much of the state. (Libby Solomon/The Baltimore Sun via AP)

ELLICOTT CITY, Md. — Flash floods struck a Maryland city on Sunday – the same town that had been wracked by similar deadly devastation two years ago – with its main street turned into a raging river that reached the first floor of some buildings and swept away parked cars, authorities and witnesses said.

News outlets showed photos and video of sudden, violent floodwaters surging down Main Street in Ellicott City, some 20 kilometers (13 miles) west of Baltimore. The community, set along the west bank of Maryland’s Patapsco River, was also stricken by deadly flash flooding in July 2016.

This time, witnesses said, the flash floods came with a roar of onrushing water after hours of heavy rain had soaked the region around Baltimore.

After the floodwaters receded, emergency officials had no immediate reports of fatalities or injuries. But by nightfall first responders and rescue officials were still going through the muddied and damaged downtown, conducting safety checks and ensuring people evacuated.

Maryland Gov. Larry Hogan, who declared a state of emergency for the flooded community, traveled there late Sunday for a firsthand look at the destruction.

Footage of Sunday’s flash flooding showed the seething floodwaters engulfing cars and pickup trucks. The Howard County Fire & EMS agency tweeted that water was above the first floor of some buildings at the height of the disaster.

Some residents of Ellicott City told The Baltimore Sun the flooding appeared to be worse than the 2016 flooding that killed two people and destroyed local businesses.

Jessica Ur, a server at Pure Wine Cafe on the city’s Main Street, told the paper she watched as gushing waters swept three or four parked cars down the street. She had been around the last time the area flooded but said this time it appeared worse.

“It’s significantly higher than it was before,” she told the newspaper, comparing the floodwaters to those of 2016.

Mike Muccilli, a meteorologist with the National Weather Service in Sterling, Virginia, said it’s too early to make comparisons between the two floods. But he said both were devastating.

“In a normal heavy rain event, you wouldn’t see this amount of flooding, where you see cars floating down the road,” Muccilli said. “This was a true flash flood.”

Howard County Executive Allan Kittleman said authorities were not aware of any fatalities or missing people. But officials were just beginning to assess the damage.

Kittleman said he toured the historic county seat after the flash flood receded and was “heartbroken” by seeing it so severely damaged again since the flooding of 2016.  As he spoke at an outdoor news conference, Maryland Lt. Gov. Boyd Rutherford put a comforting hand on Kittleman’s back.

Kittleman said he considers the damage worse than the flooding two summers ago.  Of the city’s residents and business owners, Kittleman said that “they are faced with the same daunting task again.”

Hogan also toured the area and promised “every bit of assistance we possibly can.”

“They say this is a once every 1,000-year flood and we’ve had two of them in two years,” Hogan said.

Some people reported hearing a blaring alarm during the flooding. Others said they gathered in the second story of a building to anxiously watch the seething waters. One sight during the flood: a handmade, white flag hung from an upper story of a Main Street building bearing the letters SOS.

“If you are trapped, we are coming,” the Howard County Department of Fire and Rescue Services tweeted at one point. It added that multiple rescues were carried out, and rescue swimmers were called in. Swift water units from as far away as Northern Virginia were also summoned.

Meanwhile, some roads were also flooded in neighboring Baltimore County. A spokeswoman in Baltimore County said the fire department has received dozens of calls about cars stuck in high water, as well as flooded basements.

Ellicott City has been rebuilding since the 2016 flooding damaged and destroyed businesses. Local officials recently said that 96 percent of the businesses were back in operation and more than 20 new businesses had again opened in the Main Street area.

Just two weeks ago, Hogan announced that the Federal Emergency Management Agency had awarded the state and county more than $1 million to pay for projects aimed at reducing the flood risk in areas around Main Street.             /kga