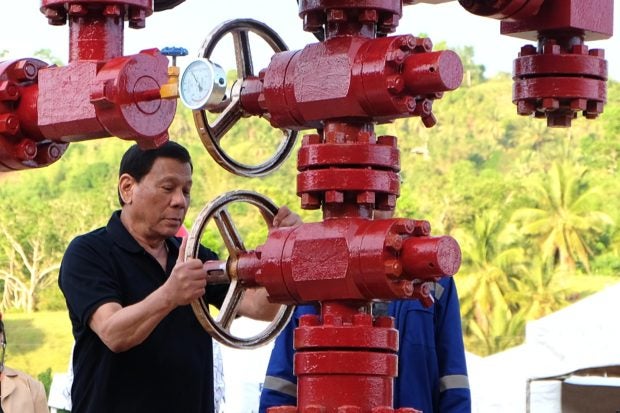 He was moved to tears when he saw oil “for the first time,” President Duterte said on Thursday, referring to last week’s ceremonial valve opening of the Alegria Oil Field in Cebu.

“I turned on the valve to switch on the oil. When I returned to the chopper, I pretended to wipe my face but I cried. At least for the first time, I saw oil,” the tough-talking Chief Executive said in a speech during the inauguration of a bridge-widening project in Davao City.

In his speech on Thursday, the President said the Philippines was not as progressive as its Asian neighbors since the country was lacking in domestic oil production.

“It’s not because we are lazy that the Japanese are better off than us. They do not have the monopoly of industry. The problem is that we don’t have oil,” Mr. Duterte said, adding that the Philippines worked hard to rebuild itself after World War II.

“While we were working a lot hard(er), really building our country, there was one thing that we didn’t have and they did. And what is it? It’s oil,” the President said, referring to Japan which also lacks significant domestic reserves of fossil fuel, except coal. Like the Philippines, Japan also imports substantial amounts of crude oil, natural gas and other energy resources to meet its domestic fuel needs.

Mr. Duterte also said that while the Philippines had the Malampaya gas field project off the coast of Palawan, it had become a source of corruption.

“But I can assure you that I will get into it. I won’t let it go on any further. You know me, I’ve been your mayor 23 years. I’ve been quite strict with money,” the former Davao City mayor vowed.

At the opening of the oil and gas production company, Mr. Duterte said Alegria should prepare for an expansive human and economic development and the influx of migrants.

“Alegria is now rich!” the President said as he led the ceremonial opening of the valve of one of six well sites in the hinterland barangay of Montpeller.

“Prepare for massive migration. Where there’s money, people will flock. Squatters will also come. But accommodate them and let them partake of the bounties God has given us from the bowels of the earth,” Mr. Duterte told a crowd composed of townfolk, local government officials and CIMP representatives.

“Plan your municipality well,” he added.

The six exploration wells in Barangay Montpeller which resulted in the discovery of oil and gas resources were expected to yield oil in commercial quantities of 27.93 million barrels and gas of up to 9.42 billion cubic feet.

The Alegria Oil Field covers a total area of 197,000 hectares, with about 42,749 hectares devoted to the production area.

Energy Undersecretary Donato Marcos said that with two wells ready for production, Alegria can churn out about 10,000 barrels a month that local industries could use as bunker fuel.

Because of the relatively small volumes of oil and natural gas, Alegria’s output is more appropriate for domestic consumption, he added.

As for natural gas, Marcos said CIMP was studying the feasibility of building an onsite power plant with a capacity of 3 megawatts more or less.

“More oil exploration activities in the country will boost economic activities and generate more jobs for our (countrymen),” Cusi said in a statement.

CIMP’s exploration and drilling operations is covered by Department of Energy Service Contract No. 49. The company has partnered with Skywealth Group Holdings Limited and Phil-Mal Energy International, Inc., in a $30.80 million investment on the project.  —WITH REPORTS FROM JOSE SANTINO BUNACHITA AND RONNEL W. DOMINGO