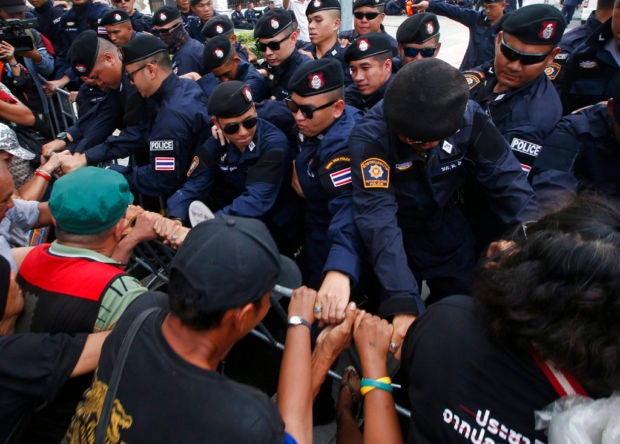 Thai pro-democracy protesters confront with riot police during a gathering marking the fourth anniversary of the military take-over of government in Bangkok, Thailand, Tuesday, May 22, 2018. (AP Photo/Sakchai Lalit)

BANGKOK — A court in Thailand extended the detention Thursday of 15 pro-democracy activists arrested earlier this week after several thousand police were deployed to halt their small protest against military rule.

Krisadang Nutjaras, a lawyer for the student activists, told reporters the court agreed to a police request for a further 12 days’ detention without considering counterarguments.

They were arrested Tuesday at a protest marking the anniversary of a 2014 military coup and calling for elections this year.

“We never got a chance to present our reasoning to show the court that the kids are people who love democracy,” said Krisadang. “If in our country people use their rights to ask for democracy and get arrested and deemed traitors that cause havoc, there is not much hope left.”

He said nearly all the activists will now try to apply for bail. It’s unclear how long that process would take and whether bail would be granted.
Police have charged each activist with several offenses including violating a ban on political assembly and obstructing officials.

Documents that police submitted to the court argued that bail should be denied because of the seriousness of the offenses. They also said they needed more time to complete their investigations.

Krisadang said police had already fully investigated and accused them of filing “excessive charges” against the protesters.
“They are not afraid of jail. If they were, they would not have marched,” he said.

Tuesday’s protest drew about 200 demonstrators but was met with an overwhelming security response. More than 3,000 officers were deployed to prevent the activists from marching from a Bangkok university campus to Government House.

The protesters, mainly middle-aged and elderly led by a core of student activists, have been holding regular rallies for the last few months, calling for the junta to resign. Political gatherings of five or more people are banned by the military government.