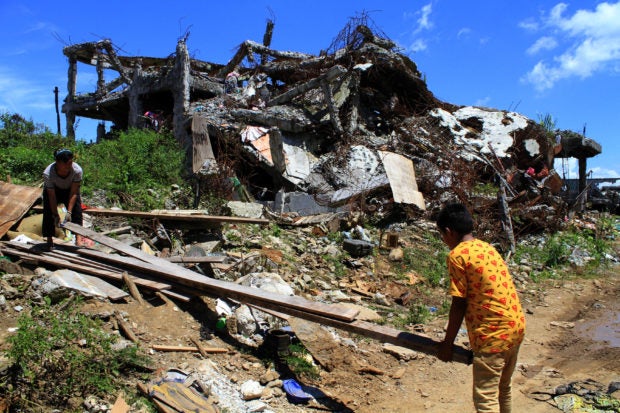 Residents from the ground zero express their high hopes to rebuild their ruin homes once the rehabilitation phase will start in June while the military guard the most affected area inside the 24 barangays of a once main battle area. Richel V. Umel / INQUIRER MINDANAO

The government on Wednesday appealed to the people of Marawi for patience, saying it was trying to expedite the reconstruction of their city and the restoration of normality to their lives, which they had been spending in shelters or temporary homes and joblessness since fleeing a terrorist attack a year ago.

“The magnitude of destruction of this disaster is immense, but we are doing our best to fast-track the process,” Eduardo del Rosario, chair of Task Force Bangon Marawi, said by phone.

Thousands have returned to the city, living in government-run shelters, since the end of fighting last October, but tens of thousands of others remain in the evacuation centers, waiting to hear from the government when they can go home.

Citing a report issued on April 16 by the United Nations High Commissioner for Refugees, Sen. Leila de Lima said in a statement from police detention on Wednesday that 59,495 of the 77,170 families, or 353,921 people, remained displaced as of March 6.

“I call on the Duterte administration to go beyond just building infrastructure and . . . hasten humanitarian assistance to the [displaced]. This way, these . . . families can rebuild not just their properties but also their lives,” De Lima said.

Sen. Antonio Trillanes IV said on Wednesday that he filed resolutions for inquiries into rehabilitation efforts in conflict-affected areas and the circumstances that led to five months of fighting between state security forces and terrorists in Marawi.

“A year after the Marawi siege, the government has yet to present a comprehensive plan on how it intends to rehabilitate the city and assist our countrymen there,” Trillanes said.