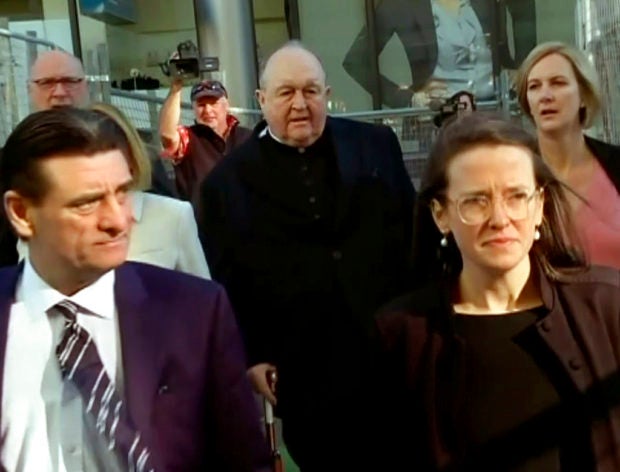 In this image grabbed from video, Archbishop Philip Wilson (center) heads to Newcastle Local Court, north of Sydney, Australia on Tuesday, May 22, 2018. The Australian archbishop, who was the most senior Roman Catholic cleric in the world charged with covering up child sex abuse, was convicted Tuesday. (Australian Broadcasting Corporation via AP)

CANBERRA, Australia — An Australian archbishop said he will stand aside but does not intend to resign after becoming the most senior Roman Catholic cleric in the world to be convicted of covering up child sex abuse.

Archbishop of Adelaide Philip Wilson was convicted on Tuesday of concealing the sexual abuse of two altar boys by a pedophile priest in the 1970s.

The 67-year-old who suffers the early stages of Alzheimer’s disease was released on bail, and faces a prison term of up to two years when he appears in court next month for sentencing.

Wilson said on Wednesday he would stand aside on Friday after the necessary administrative arrangements had been put in place to manage his archdiocese.

Read Next
Suspected illegal drug group leader falls in Legazpi City
EDITORS' PICK
Tired of your Wi-Fi signal problems at home? Here’s a solution!
Must-know scams to avoid when buying cars
Average new COVID-19 cases daily in NCR down 30%
POVA x Mobile Legends Bang Bang: A partnership that’s built to win
Patients evacuated as fire hits PGH
Concepcion: Consider vaccine passes once herd immunity reached in NCR Plus
MOST READ
Patients evacuated as fire hits PGH
Mikey Garcia ‘not getting hopes up’ as Pacquiao fight yet finalized
Go pushes bill seeking creation of Center for Disease Control and Prevention
Dave Bautista on his Filipino grandfather, living with regret and being around superheroes and zombies
Don't miss out on the latest news and information.