Priest’s lesson in Marawi: Be calm in the face of death | Inquirer News
Close
menu
search

Priest’s lesson in Marawi: Be calm in the face of death 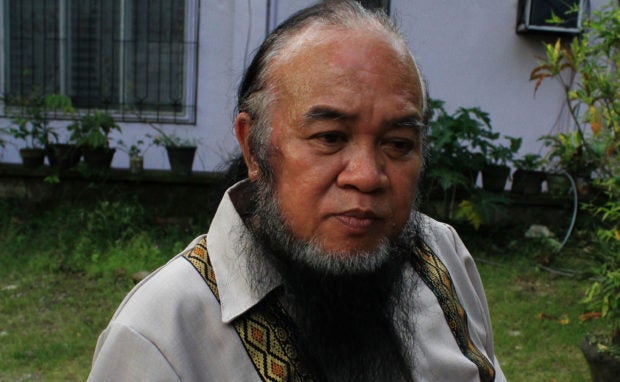 NORALA, South Cotabato — Eight months since his escape from terrorist captivity, Catholic priest Teresito Soganub still wants to return to Marawi City, where he served as vicar general of the local prelature and parish priest for more than 10 years.

But his family and doctors and superiors in the Catholic Church discourage him from going back.

The soonest he could return to Marawi, he was told, would be after a few years or “by the time my posttraumatic stress depression is gone.”

For 116 days last year, the parish priest based at St. Mary’s Cathedral and a group of hostages faced death every day at the hands of Maute group and Abu Sayyaf terrorists who seized Marawi to establish a province for the Islamic State (IS) jihadist group in Southeast Asia.

In an interview in November last year, Soganub spoke of how he initially feared being killed by his captors, especially when he and 12 other hostages were lined up in the middle of a basketball court at the plaza in Barangay Bangolo.

“I thought they would execute us. The 13 of us and about 50 armed men were the only ones in the plaza,” he said.

But the gunmen did not harm them, he said.

Soganub said airstrikes and stray bullets also frightened him during his captivity. The fear of being killed in the crossfire during military operations against the terrorists continued to hound him, he said.

During the Inquirer interview on May 10, Soganub recounted how two convent boys at St. Mary’s Parish were separately killed by stray bullets. They were carrying bullets and supplies for the gunmen on the front lines, not far from Bato Mosque.

The mosque and St. Mary’s Cathedral, where he and several other church workers had been taken, were just a block away.

He said the gunmen gave him tasks, the most difficult of which was dismantling unexploded bombs as huge as an acetylene tank from the airstrikes using a hacksaw.

“I told them it might explode if I tampered with it, [but] they said, ‘No, it will not explode. We are here beside you. If you die, we all die,’” he said, quoting one of the gunmen.

“I was trembling the first time but later it became easy,” he said.

The gunmen used the powder and shrapnel from the bombs to make improvised explosive devices and rigged Bato Mosque with them.

He said Bato Mosque was the gunmen’s central base and it was there that the hostages, whose number grew every day, were held.

“[Brothers] Omar and Abdullah [Maute] and Isnilon (Hapilon) were there most of the time. We were also kept there to take care of food supplies and cooking,” he said.

“There were foxholes and they created running trenches so we can move from one building to another,” he added.

Hapilon, the so-called “emir” of IS in Southeast Asia, and the Maute brothers were killed in the fighting.

“The trauma is very deep but I have to face this trauma,” he said.

“If there is one lesson I learned, it is to be calm even in the face of death,” he said.

“One should remain calm, should not show resistance when faced with a life-and-death situation. And, of course, never cease praying, asking God for protection,” he said.