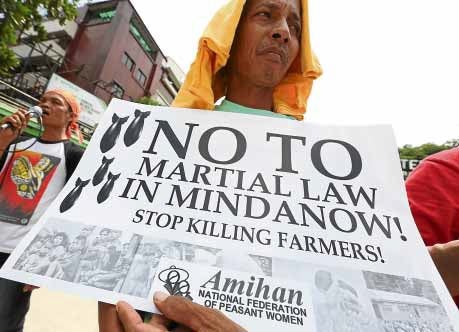 CRAME PROTEST Activists led by the National Federation of Peasant Women protest alleged human rights violations committed against the rural poor under the Duterte administration in Mindanao in front of Camp Crame in Quezon City on Monday. —NIÑO JESUS ORBETA

Human rights group Karapatan on Tuesday called on the United Nations and the Commission on Human Rights (CHR) to investigate the alleged human rights abuses committed by state agents against activists and human rights advocates since the imposition of martial law in Mindanao last year.

The group made the call as it submitted its findings on the alleged abuses, noting an average of nearly one unsolved killing each week since President Duterte declared martial law on May 23 last year to battle Islamic State-inspired gunmen who laid siege to Marawi City.

In their letters to eight UN special rapporteurs and the CHR, Karapatan said it had documented at least “49 victims of ‘extrajudicial killings’” in Mindanao since martial rule was imposed. Most of the victims were indigenous people and members of peasant groups, it added.

“The report outlines how the Duterte administration, through his own brand of war on terror with the imposition and extension of martial law in Mindanao and the continuing implementation of [the] government’s counterinsurgency program ‘Oplan Kapayapaan,’ has promoted state terrorism and violence in the southern Philippines,” said Cristina Palabay, Karapatan secretary general.

Karapatan urged the CHR to investigate the alleged human rights violations and prosecute the police and soldiers involved and call for the immediate lifting of martial law, which, it said, was used by government forces as a license to commit supposed atrocities.

The group also called for an end to airstrikes against communities targeted by the military, urged relief and assistance for people displaced by bombardments, and pressed for the termination of counterinsurgency programs like Oplan Kapayapaan, which, it said, “encourages the use of ‘hit lists’ that target activists and civilians.”

The group said it had documented 22 cases of torture, 116 victims of frustrated extrajudicial killings, 89 victims of illegal arrest and detention, and 336,124 victims of indiscriminate shooting and aerial bombings.

“At least 404,654 individuals have been displaced, largely because of these bombings. Many more reported cases reveal a much graver magnitude of the effects of martial law,” it said.

One of the most recent victims was 33-year-old Ariel Maquiran, a banana plantation worker gunned down by motorcycle-riding men as he headed for work in Panabo City, according to Zarate.

Maquiran, a member of Bayan Muna, survived an attempt on his life just the day before.

Maquiran had earlier been questioned by the military on his alleged role in the 2017 takeover of land occupied by Lapanday Foods Corp. but that the Department of Agrarian Reform had awarded to farmers under the agrarian reform program. —With a report from Allan Nawal