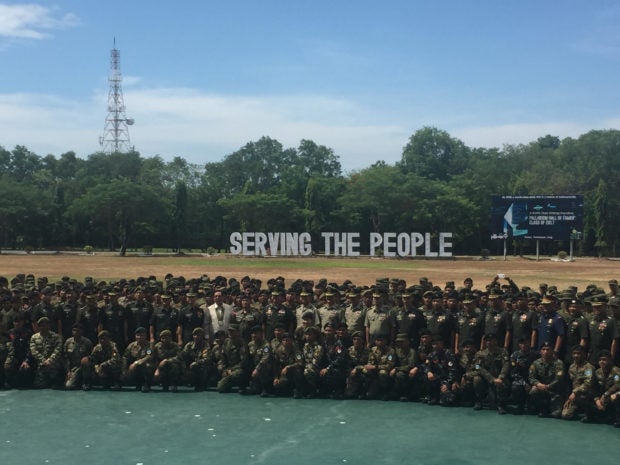 The Philippine Army honors 641 officers and enlisted personnel for their role in the Marawi siege. (PHOTO by Frances Mangosing/Inquirer.net)

More than 600 officers and enlisted personnel were promoted to the next higher rank for their contribution to the liberation of Marawi City from terrorists.

A donning of ranks ceremony was held at the Army headquarters in Fort Bonifacio on the eve of the first anniversary of Marawi siege on Tuesday.

“The star on your shoulders for the promoted generals and the added stripes for our enlisted personnel are not mere decorations but a description of two things in your journey as men in uniform,” said Army commanding general Lt. Gen. Rolando Joselito Bautista.

“It is a testament of your performance excellence that had greatly contributed in the realization of the AFP’s campaign. Second, that speaks of your responsibilities to continue leading the Philippine Army to prominence,” he added.

The five-month Marawi siege was the government’s worst security crisis in recent years. It started on May 23 last year, when ISIS-inspired terrorists laid siege to the city. About 12,000 military personnel were deployed to fight the terrorists and rescue civilians.

The months of fighting left 168 government forces, over 900 terrorists, and 47 civilians killed. /ee

READ: Battle for Marawi: Bitter siege that left a city in ruins