Texas mourners endure grief that ’none of us can comprehend’ 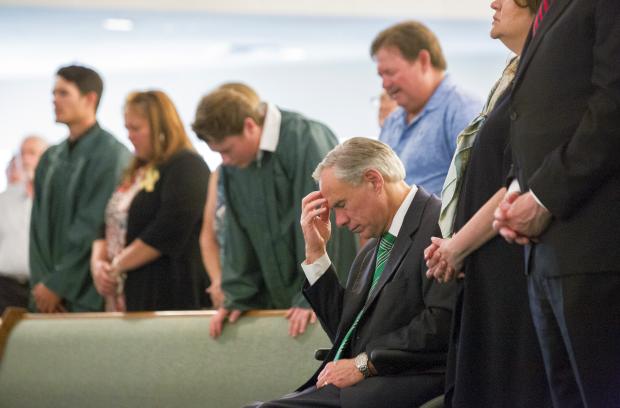 The Texas Gov. Greg Abbott joins a congregation in prayer on Sunday, May 20, 2018, at the Arcadia First Baptist Church, after a school shooting at Santa Fe High School on Friday, in Santa Fe, Texas. (Photo by MARIE D. DE JESUS / Houston Chronicle via AP)

SANTA FE, Texas — Congregations in this deeply religious community near Houston gathered Sunday for their first services since a gunman blasted his way into a high school and killed 10 people, with one pastor lamenting the grief “that none of us can comprehend.”

Just two days after the deaths of eight students and two substitute teachers, graduating seniors also marked the end of the school year with a baccalaureate service that acknowledged the pain wracking Santa Fe, a town of 13,000, while Muslim mourners remembered the life of a slain exchange student from Pakistan.

“They will never be forgotten in this community, these young people, children just going to school,” said Brad Drake, pastor of the Dayspring Church, where a service was held that included memories of a slain student who was a congregant there. “We have families today that are grieving a grief that none of us can comprehend.”

Drake read the names of the dead, including Angelique Ramirez who attended Dayspring and was a member of the church’s youth ministry. Angelique’s family was not at the service.

“She was a sweet young lady, had a style all of her own,” he recalled. “She almost always had a new hairstyle.”

Kelly Ward, a licensed counselor who runs a ministry in Springfield, Missouri, took the stage to urge congregants not to suppress emotions.

“How do we get through this? What do we do?” Ward asked. “The answer is to let everyone grieve, including yourselves.”

He said people can help mourning families or friends simply by listening “because dwelling in us is the spirit of God.”

Church leaders wore green T-shirts with gold lettering —the colors of Santa Fe High School. Inside an outline of the state of Texas, the letters spelled out a verse from 2 Corinthians 4:8-9: “We are hard pressed on every side, but not crushed; perplexed, but not in despair; persecuted, but not abandoned; struck down, but not destroyed.”

In a nearby church kitchen, parishioners prepared plates of barbecue to be sold after the service, with all proceeds going to victims’ families.

At Arcadia First Baptist Church, Texas Gov. Greg Abbott hugged parishioners as they arrived. Among them was Monica Bracknell, an 18-year-old senior who survived the shooting. She stopped to tell the governor that the attack should not be turned into a political battle over gun control.

Surrounded by television cameras, photographers and reporters, she told Abbott guns were not to blame.

Arcadia First Baptist also hosted the baccalaureate service Sunday evening, which was moved from the school auditorium in the wake of the shooting. Speaker and Santa Fe graduate Aaron Chenoweth gave a short testimony about the trials and tribulations this graduating class had faced.

Chenoweth called on the community’s faith in God, saying, “If you give God the glory, you will always find comfort and love.”

It was not the first time faith in Santa Fe has been tested with the whole country watching. In 2000, the city was at the center of a landmark U.S. Supreme Court decision that banned students from leading pregame prayer over loudspeakers.

The court ruled 6-3 that the school district’s policy of allowing student-led prayers at campus events violated the constitutionally required separation of church and state. Justices said giving students a public forum for prayer was effectively sponsoring the message.

Also Sunday, Texas Lt. Gov. Dan Patrick called for a “hardening” of the nation’s school buildings in the wake of Friday’s attack.

Patrick, a Republican, blamed a “culture of violence” and said more needs to be done to keep shooters away from students, such as restricting school entrances and arming teachers.

“When you’re facing someone who’s an active shooter, the best way to take that shooter down is with a gun. But even better than that is four to five guns to one,” he told CNN’s “State of the Union.”

On ABC’s “The Week,” Patrick said he supports background checks for gun purchasers but stressed that “gun regulation starts at home.”

Meanwhile, hundreds of members of Houston’s Muslim community attended a service for Sabika Sheikh, a 17-year-old exchange student from Pakistan who talked about one day becoming a diplomat.

Her host mother, Joleen Cogburn, recalled asking Sheikh why she came to study in the U.S. She said she wanted to learn American culture and to share Pakistani culture with Americans.

“And I want us to come together and unite,” she told Cogburn. “I don’t know if they know us the way they should.”

Houston Mayor Sylvester Turner said Sheikh continues to be a diplomat “because even in her death, she is pulling the relationships between Pakistan and the United States, specifically the Houston area, even closer.” Her body was to be returned to Karachi.

The suspect, Dimitrios Pagourtzis, also 17, has been jailed on capital murder charges.

In their first statement since the massacre, Pagourtzis’ family said Saturday that the bloodshed “seems incompatible with the boy we love.”

“We are as shocked and confused as anyone else by these events,” said the statement, which offered prayers and condolences to the victims.

Relatives said they remained “mostly in the dark about the specifics” of the attack and shared “the public’s hunger for answers.”

The suspect’s attorney, Nicholas Poehl, said he was investigating whether his client endured any “teacher-on-student” bullying after reading reports of Pagourtzis being mistreated by football coaches.

In an online statement, the school district said it investigated the accusations and “confirmed that these reports were untrue.”

Poehl said that there was no history of mental health issues with his client, though there may be “some indications of family history.” He said it was too early to elaborate.