Classes in Marawi to start on June 4, says DepEd 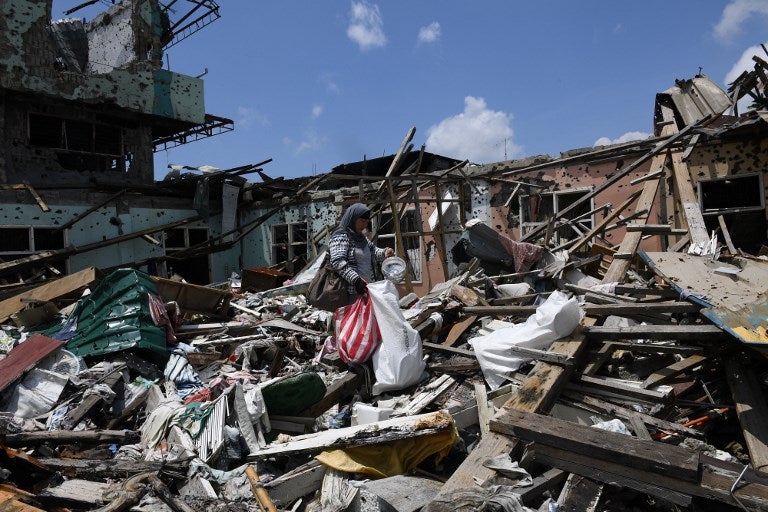 A resident collects salvageable belongings from her destroyed house during a visit to the main battle area in Marawi City, in southern island of Mindanao on April 1, 2018.  AFP FILE PHOTO / TED ALJIBE

Classes in war-torn Marawi City will begin on the same day as the rest of the public schools nationwide on June 4, the Department of Education (DepEd) said on Monday.

Education Secretary Leonor Briones said she would visit “ground zero” for the first time on Tuesday to assess the conditions of the schools in the Southern city that was devastated by war between government forces and Islamic State-inspired Maute group last year.

“We are doing all we can to speed up the construction and repair of the school buildings in Marawi,” she said in a press briefing in the DepEd central office in Pasig City.

On Wednesday, Briones, along with Assistant Education Secretary Alfhadar Pajiji of DepEd Autonomous Region for Muslim Mindanao (ARMM), is expected to lead the closing of the “Brigada Eskwela sa Marawi” and the launch the “Oplan Balik Eskwela in Marawi” in Amai Pakpak Central Elementary School in Marawi City, Lanao del Sur province.

Launched in December 2017, the Brigada Eskwela sa Marawi was DepEd’s flagship program for the recovery and rehabilitation of the Islamic City after the five-month siege.

Last year, at the height of the siege that began at the tail-end of May, classes in Marawi and in eight districts nearest to the armed conflict were pushed backed by two weeks to ensure the safety of students, teachers and DepEd employees.

Data from DepEd showed that over 31,000 learners were displaced from the city and were forced to continue their studies in other schools across the country.

Despite the ongoing rehabilitation, however, Briones noted that not all schools in Marawi can be opened for classes this school year.

“We have surveyed [the area] even before the Marawi siege, there were schools that were deemed not appropriate or safe for classes,” she said. “What DepEd did was to cluster the schools, after we observed that they were adjacent to one another.”

Briones said that of the 69 schools in the city, more than 20 schools would not be able to accommodate students for the upcoming school year. But she stressed that some of these facilities would be closed not just because of the bombings during the siege, but also because of their poor and unsafe conditions.

Over 40 schools, meanwhile, would need to undergo repairs, she noted. “Hopefully, we can accommodate all those who want to go back and enroll,” she said.

The education secretary also said that they are working close with DepEd ARMM to ensure that there would be enough teachers in the Marawi schools that would hold classes. “We are working very closely with each other, especially on the sharing of data and the provision of infrastructure, school supplies and learning materials and equipment,” she said.

In April, DepEd also received 200 computer monitors and health kits from LG Electronics for 46 affected schools in the city, which will be distributed by the regional office. /je