Malaysia steps up graft probe of fund linked to ex-leader 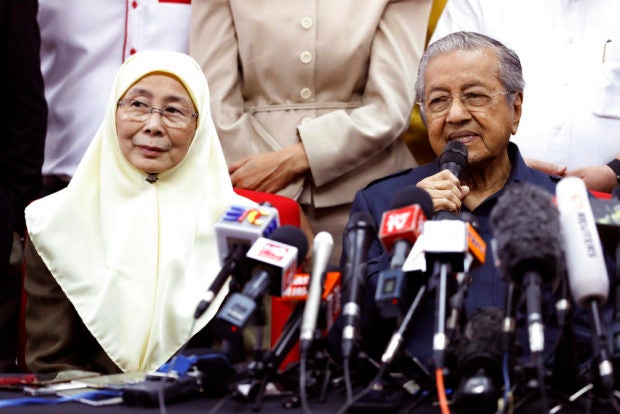 KUALA LUMPUR, Malaysia (AP) — Malaysia’s new government stepped up a corruption investigation into a state fund with a seven-hour police search of the home of former Prime Minister Najib Razak and the creation of a special committee to accelerate the probe.

Police searched Najib’s house until early Thursday morning and also raided an upscale condominium in Kuala Lumpur occupied by his family as part of the money-laundering investigation.

He said several policemen went to an upstairs room several hours after the search ended and began drilling a safe that had not been opened for two decades because the key had been lost.

“The search conducted in the premises and the items seized thus far would seem of insignificant value and the continued presence of police officers and the drilling of the old safe strongly suggest unwarranted harassment,” Grewal said in a statement.

Najib has indicated he is willing to cooperate with the probe, but “this harassment has now continued for almost 18 hours and nothing meaningful has come” of it, the lawyer said.

Najib started the fund in 2009 and US investigators say at least $4.5 billion was stolen and laundered by his associates, some of which landed in his bank account.

The government announced Thursday that it set up a five-member committee, including a former attorney general and an adviser to Indonesia’s Financial Services Authority, to handle the 1MDB case.

“Until and unless the issue of 1MDB is resolved, there will be questions that undermine public confidence in the government and its institutions,” it said in a statement.

Asked about the search of Najib’s house, Mahathir said Thursday that “police have enough reasons to conduct the raid” although he wasn’t informed about it.

“I didn’t know that they should raid at night but my instruction is very clear: I’m not going to torture people and things like that. I want people to be treated decently,” he said.

Mahathir, 92, has said an initial investigation showed the scale of wrongdoing by Najib’s administration was more serious than expected. He has said that arrests will be made when there is evidence, and there would be “no deal” with Najib.

Najib has denied any wrongdoing but the raids have fueled speculation his arrest may be imminent. He and his wife have been barred from traveling overseas.

“He was calm and of course upset, but the whole family cooperated,” Grewal said of Najib.

Commercial crime director Amar Singh Ishar Singh said police also searched several other locations, including the prime minister’s office and official residence, which haven’t yet been occupied by Mahathir. He declined to give details. Police officials did not comment.

Mahathir has said the government will seek to retrieve billions of dollars laundered from 1MDB to repay government debts that have piled up over the years. The government has also told the current attorney general, who cleared Najib of wrongdoing in 2016, to go on leave, and has relieved the country’s treasury chief, who is also the 1MDB chairman.

Mahathir, who was prime minister for 22 years until 2003, emerged from retirement and teamed up with former foes including reformist leader Anwar Ibrahim to oust Najib amid anger over the 1MDB fiasco.

Anwar, who walked free Wednesday after obtaining a royal pardon from a 2015 sodomy conviction he said was politically motivated, told The Associated Press in an interview Thursday that Najib “must pay” for his wrongdoing in the 1MDB scandal.

Anwar, who is slated to take over from Mahathir in a couple of years, said Najib had been living “in a cocoon” and underestimated public wrath over the fiasco. He said it will be challenging for the new government to clean up the financial mess.