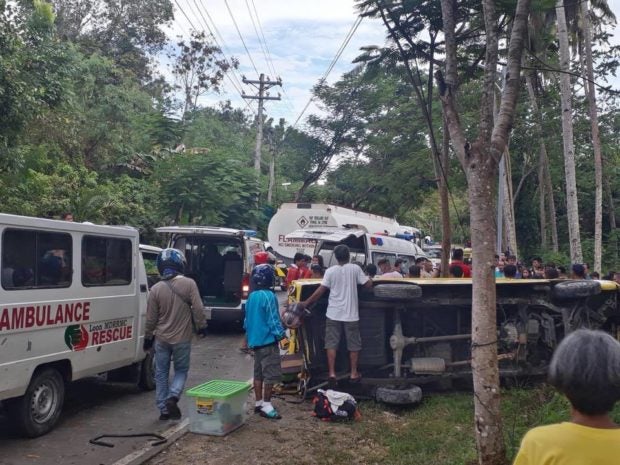 TAGBILARAN CITY, Bohol – At least 22 passengers of a multicab were injured after their vehicle was hit by an oil tanker in Maribojoc town on Wednesday afternoon.

Among those hurt were a one-year-old infant and two other children who were immediately brought to the hospital in the capital city of Tagbilaran for treatment.

The 22 passengers were rushed to a public hospital while others were transferred to a private facility.

All of the victims were in stable condition since they only suffered minor injuries.

PO3 Eugene Jay Morgia of the Maribojoc Police Station said the oil tanker driven by Ramil Batingal was trailing the multicab as both vehicles were heading to Tagbilaran City from Loon.

Morgia said the oil tanker attempted to overtake the multicab in Barangay San Vicente Area but was forced to return to its lane due to an incoming vehicle at the opposite lane.

But Batingal lost control of the tanker and hit the multicab which crashed and flipped to its side./lb