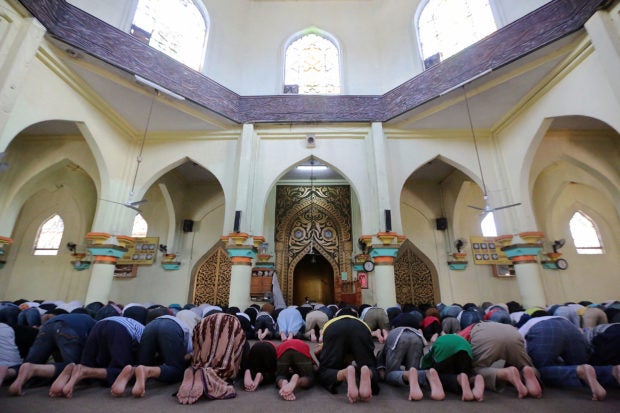 CALL TO WORSHIP Muslims respond to the call to worship at the Golden Mosque in Quiapo, Manila, on Wednesday, a day ahead of the start of the holy month of Ramadan. —GRIG C. MONTEGRANDE

DAVAO CITY — Muslims in the Philippines start their annual fast on Thursday, after Saudi Arabia’s moon-sighting committee failed to see the Ramadan crescent on Tuesday.

Alim Ed Jamal Munib, executive director of the Madrasah Comprehensive Development and Promotion Program in Davao City, said most people had expected the fasting month of Ramadan to start on Wednesday.

“[But] the moon was not sighted, so Thursday is the start,” Munib said.

“Tarawih,” a nightly Ramadan prayer, was said on Wednesday,  after “isha.”

Devout Muslims fast from dawn to dusk during Ramadan, abstaining from even water. They refrain from smoking, vaping and chewing gum.

They also abstain from sex, avoid offending other people’s sensitivities, and desist from breaking laws.

Fasting, however, is not compulsory for Muslims with health problems, children, the elderly, nursing women and travelers.

At “iftar,” or the breaking of the fast at dusk, Muslims share food, making for little feasts in the communities.

For Muslims, Ramadan is not only a month of abstention, but also of prayer, meditation, and reflection, especially on improving their relations with others.

In the Middle East, government reduces working hours during the holy month.

Ramadan always falls on the same date in the Hijrah calendar. The date varies each year in the Gregorian calendar.

In a statement, Gov. Mujiv Hataman of the Autonomous Region in Muslim Mindanao described the advent of Ramadan as “a time for us to renew our commitment to the faith.”

“It is a time for solidarity, reinforced by the fast we share with the Muslim ummah,” he said. “Our shared struggle as Muslims in the Bangsamoro, however, goes beyond the fast.”

Hataman recounted that it was about this time last year that the people of Marawi, the only majority-Muslim city in the Philippines, were sent fleeing by a terrorist attack and siege that lasted for five months.

The “great tragedy” brought pain and grief “not only [to] the great city but [to] our hearts as well,” Hataman said.

“But it is also through this shared struggle that we continue to rediscover the depth of our love for our brothers and sisters, as we constantly share a collective strength that can only come from a steadfast faith in Allah himself,” he said.

The governor urged Muslims to “pray for the lives of thousands who have been affected by conflict, both past and present, as we continue to pray for peace and justice in our homeland.”

“May we remember that Allah desires ease and not hardship for us all, and may we always treat our brothers and sisters with kindness and mercy, guided by the intention of helping to bring at least a semblance of the ease Allah desires for us,” he said.

Hataman also reminded Muslims of their responsibility to “work in solidarity toward a renewal of our commitment to our faith, toward rebuilding a city and its spirit, and responding to the continued call for peace in our communities.”