LOOK: An actual wake for democracy is going on in Padre Faura 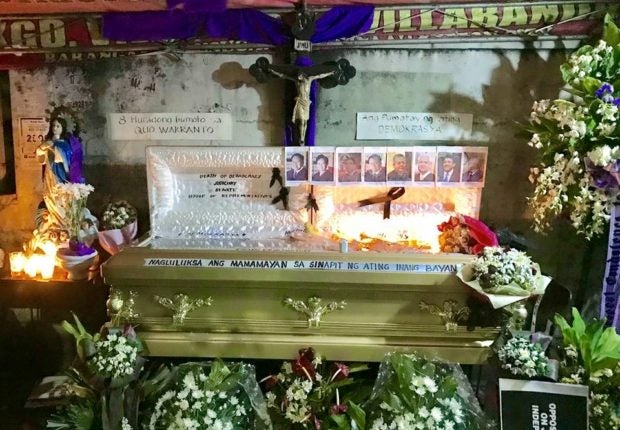 When in Padre Faura St., Ermita, Manila, a curious installation in the left side of the road offers itself up to onlookers and bystanders. From afar, the funeral wake set-up can easily be missed, if not accidentally mistaken for an actual wake; but upon further inspection, one will see that it is anything but. There is an ostensibly grim and despondent air to it upon initial approach, the silence only broken by the quiet chatter of a small group huddled under a tent.

A gold casket sits in the middle, adorned with flowers, black ribbons and, for the unknowing, eight pictures of the Supreme Court Justices who voted in favor of the quo warranto petition against now-ousted Chief Justice Maria Lourdes Sereno. Above their names, a sign says: “Ang pumatay ng ating DEMOKRASYA.” (Those who killed our democracy.)

“Lamay Para Sa Demokrasya” is an installation organized by Fr. Robert Reyes and Fr. Joselito “Bong” Sarabia, activist priests of the group GOMBURZA, in partnership with Filipino Cultural Creatives. Despite the pomp and props of the installation, however, the wake doesn’t literally allude to the “death” of democracy.

“We have to clarify… although we say na naglalamay tayo sa kamatayan ng demokrasya (that we’re attending a wake for the death of democracy), that’s not very accurate,” the 63-year-old Fr. Reyes explained to INQUIRER.net last night, May 15. “Democracy has not died, but there is an attempt to kill democracy, there’s an attempt to replace democracy with something else, kaya merong sugat. Nasugatan ang demokrasya (There is a wound. Democracy has been wounded).”

Beneath the viewing gauze is an effigy of Lady Justice and the emblem of the Supreme Court, with a knife pierced through it on her chest.

“If you look at the effigy, the emblem of the Supreme Court is on the chest, [there] is a knife that pierces it, kaya nasugatan (so it’s wounded), pero (but) almost mortally wounded. Of course nakakabaong (it’s in a coffin) to dramatize [that] the wound is very serious.” 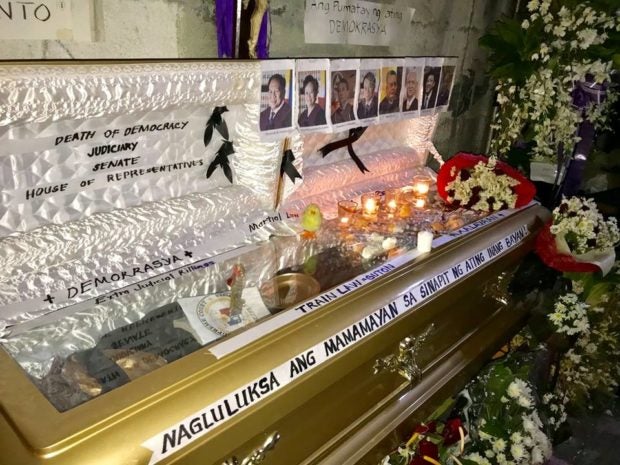 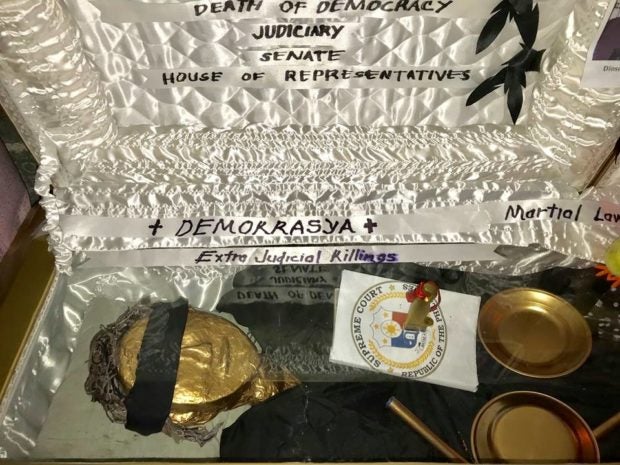 The “lamay” for democracy came to light last May 11, assembled in just four hours after the ousting of Sereno was announced. Although they were on the verge of folding up their gathering of “Dasal at Ayuno” (Prayer and Fasting), Fr. Reyes shared that there were people who arrived and wanted to sustain the protest.

(Just when we were ready to pack up the initial protest, there are those who came and asked, “Where are you going, Father?” We realized that people really wanted to sustain the protest. So we decided, “Come on, let’s stay put,” but we thought, “What format?” We can’t do a prayer-fasting anymore. One of us, Father Bong said, “A coffin.” Okay then, a funeral. A wake.)

Four hours later, a coffin was borrowed and wreaths were purchased to start the assembling of the wake. “It was not planned ahead of time, within a few minutes, we decided in order to sustain the protest, we will set up the burulan (wake) here in Faura. So, lamay at kapihan sa (a wake and coffee time here in) Faura.”

Since then, the wake has been an outlet for people’s frustrations, hurts and hopes. Apart from having grassroots artists come to perform songs, mothers of alleged EJK victims also came to speak about their ordeal.

Yesterday, May 15, a public viewing of the effigy was held, followed by a procession around Padre Faura, which culminated to a mass. Today, May 16, another sharing by the families of victims was held, as well as a creative gesture that had mourners lying down in front of the Supreme Court.

It’s a certain kind of activism that is definitely performative and theatrical, one that goes beyond the realm of Facebook and Twitter say-sos, and leaves a lasting visceral imprint to the viewer. During these times, it’s a praxis not just to show a stance against Sereno’s ousting, but also to demonstrate a necessary, essential act to keep the protesters’ hopes alive.

“I have never said and will always refuse to say that it is hopeless. Even Chief Justice [Sereno] in her speech when she was outside, her first words were ‘We have won.’ Far from the declaration of hopelessness, it was a declaration of victory.”

The flickering candles from the wake cast a shadow on Fr. Reyes face, but in a voice so antithetical to the wake’s gloomy atmosphere, he gives a wrinkly smile and said, “People who are incurably hopeful will always find ways in believing that in the darkest night, there’s always the dawn that follows.”

The funeral wake will continue on until Pentecost Sunday, May 20. More details may be found on their Facebook page, Lamay Para Sa Demokrasya. JB

Ousted but unshaken: On the contrary, ‘we won’ – Sereno