Hamas using embassy as ‘excuse’ for violence – US 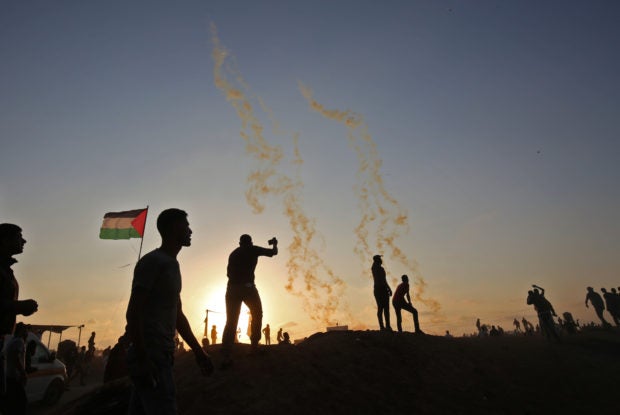 Palestinians protest as tear gas fumes erupt near the border with Israel east of Khan Yunis in the southern Gaza Strip on May 15, 2018, marking the 70th anniversary of Nakba — also known as Day of the Catastrophe in 1948 — and against the United States’ relocation of its embassy from Tel Aviv to Jerusalem.  (AFP PHOTO / SAID KHATIB)

Hamas, the Islamist movement that rules Gaza, is using the controversial unveiling of the American embassy in Jerusalem as an “excuse” to encourage violence, the United States’ State Department said on Tuesday, after Israeli forces killed 60 Palestinians during protests.

When pressed by journalists in Washington, State Department spokeswoman Heather Nauert refused to follow other Western countries in calling for restraint from Israel or even all parties.

“This is a complex region,” Nauert said.

Nauert declined to link the violence with the new American embassy unveiled on Monday after the US unilaterally recognized Jerusalem as Israel’s capital. The Palestinians claim east Jerusalem as the capital of their future state.

“If Hamas wants to use that as an excuse to rile people up, and to encourage violence, that is their choice. It’s an irresponsible choice,” she added.

Israel was coming under mounting international pressure and called for an independent probe over the violence.

Palestinians on Tuesday marked the Nakba, or “catastrophe,” commemorating the more than 700,000 Palestinians who fled or were expelled in the 1948 war surrounding Israel’s creation.

Protests and sporadic incidents flared again on Tuesday on the Gaza border, though they were far fewer in number than the previous day, with two Palestinians killed by Israeli fire, Gaza’s health ministry said.            /kga