Text messages on location of former La Union lawmaker before attack led to suspect
By: Gabriel Cardinoza - @inquirerdotnet
Philippine Daily Inquirer / 05:20 AM May 16, 2018

CRIME SCENE Policemen inspect the area at Barangay Capas in Agoo, La Union, where former Rep. Eufranio Eriguel was gunned down on May 12. — RICHARD BALONGLONG 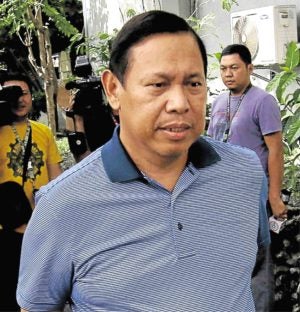 AGOO, La Union — Text exchanges pinpointing the location of former La Union Rep. Eufranio Eriguel before he and two aides were killed on Saturday night led the police to a candidate who lost in Monday’s barangay elections.

Felizardo Villanueva was charged with three counts of murder in connection with the attack on a Sangguniang Kabataan (SK) caucus at Barangay Capas here.

What gave Villanueva away was the exchange of text messages he had with an accomplice before the gun attack, said Chief Supt. Romulo Sapitula, Ilocos regional police director. He did not give other details of the messages.

But the information provided by Villanueva could help lead the Police Special Investigation Task Group (SITG) Eriguel to the man who ordered Eriguel killed.

A police source said a video clip of the covered court where Eriguel spoke was sent to an unidentified number using Villanueva’s mobile phone.

Another source said Villanueva’s phone had outgoing messages that were deleted so the police had asked their cybercrime division to help recover them.

It was not clear how the police got hold of Villanueva’s phone.

Villanueva failed to win the post of village chair in Capas. He was one of two persons of interest who were detained shortly after the attack.

Chief Insp. Silverio Ordinado, SITG Eriguel spokesperson, said frustrated murder cases would also be filed against Villanueva after investigators got the statements of the other victims.

The second person of interest is still at large, Ordinado said.

On Monday, the Eriguel family members welcomed Villanueva’s arrest but said the police should look deeper into the attack, which they believed was politically motivated.

“This is a very difficult and trying time for the family. I respectfully appeal to our beloved President [Duterte]. You’re the father of our nation, you are a man of justice, you’ve brought reforms to the country, you were also a mayor and congressman,” said Eriguel’s widow, incumbent La Union Rep. Sandra Eriguel.

“Dear President, please help resolve this case. Get the perpetrators, especially the mastermind of this crime. It is a cowardly act,” she said.