N. Korea says ‘satisfactory consensus’ reached with the US 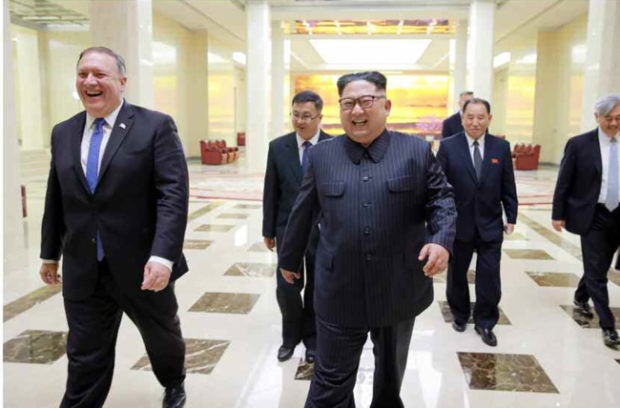 SEOUL — North Korean leader Kim Jong-un has reached a “satisfactory consensus” with a top US official, North Korean media reported Thursday, prompting speculations that the two countries may be narrowing the gap over denuclearization.

According to North Korean media, Kim a”nd US Secretary of State Mike Pompeo discussed “the acute situation of the Korean Peninsula,” and reached a satisfactory consensus on the issues discussed, without elaborating on details.

With the “acute situation” indicating North Korea’s nuclear program, experts believe the US has agreed to accept a large portion of North Korea’s phased approach toward denuclearization.

The US has been highlighting its commitment to achieving complete, verifiable, and irreversible denuclearization carried out swiftly, without giving North Korea concessions until the end of the process.

North Korea, meanwhile, is believed to prefer a phased approach, possibly in the hope of using certain steps toward denuclearization as bargaining chips for the survival of its regime and formal diplomatic recognition from the US.

“It’s actually the process in achieving CVID (complete, verifiable, and irreversible denuclearization) that matters the most because CVID could be also achieved through the North’s phased approach, but such an approach is expected to take years to complete. And meanwhile, it could buy time for the North to establish its position as a solid nuclear state and return to its old ways of provocations,” Go added.

“In the history of nuclear disarmament, nuclear states have never once relinquished their nuclear weapons willingly of their own volition — it was either brought as a result of a regime change or other special reasons. This is also a unique situation for the US.”

The KCNA announcement also marks the first time the North officially announced the summit to its citizens, with Kim saying his meeting with US President Donald Trump would be a “historic meeting for the excellent first step toward promotion of the positive situation development in the Korean peninsula and building of a good future.” Previously, the state-media had merely mentioned the new ties between the two nations as “dialogue with the US.”

Analysts have said in recent months that when the North announces its summit with the US, it will be when it is fully prepared to spin its side of the story on coming to terms with the US, only for the nation’s economic prosperity. It has lambasted the US as an enemy state for years.

Kim recently announced completion of his signature “byongjin” policy of nuclear and economic development and decided to turn his full attention to recovering its poverty-stricken economy.

Pompeo visited Pyongyang on Wednesday to hammer out details for the summit, including the date and venue, while working for the release of the US detainees in the North. The detainees were released and flown back to the US mainland, accompanied by Pompeo.

Regarding the date and venue of the summit, US officials are making preparations for a meeting in Singapore between President Donald Trump and North Korean leader Kim Jong-un, according to CNN.

Trump instructed his aide to gear up for his talks with Kim in the Southeast Asian city-state, said CNN, citing “two people familiar with the plans.”

The White House earlier said the date and site for the unprecedented meeting between the leaders of the two sides had been set. Kim and Trump originally agreed to meet each other in May, but the meeting may take place in June.

A related announcement is expected in a few days.