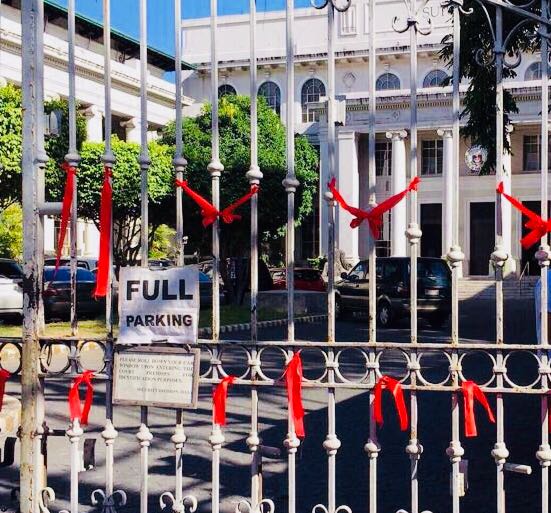 The red ribbons placed at the gate of the Supreme Court in Manila. Contributed photo

Red ribbons embellished the gates of the Supreme Court on Thursday, a day before the special en banc (full court) session to discuss the fate of Chief Justice Maria Lourdes Sereno through the quo warranto petition.

This came after the Supreme Court Employees Association (SCEA) issued an advisory Wednesday evening urging its members to wear red on May 10 and 11.

(Let us highlight our unity against the lies and destruction of the integrity of our very own beloved institution–the Supreme Court.)

(Let us pray that the decision of our magistrates will be in accordance with the truth and goodness of the Supreme Court, judiciary and the entire Filipino nation.)

The group even used the hashtag #OneSupremeCourt.

Also on Wednesday evening an Associate Justice of the Supreme Court in his Twitter posts talked about the significance of the color red in love and war and what the shade was if one is driven by love to fight.

(Red is the color of love and combat, purely red if love if fighting.)

The color red was used as a symbol by the high court’s employees to highlight the fight for judicial independence and call for Sereno’s resignation. During several flag ceremonies at the Supreme Court, employees as well as judges present wore red. /jpv