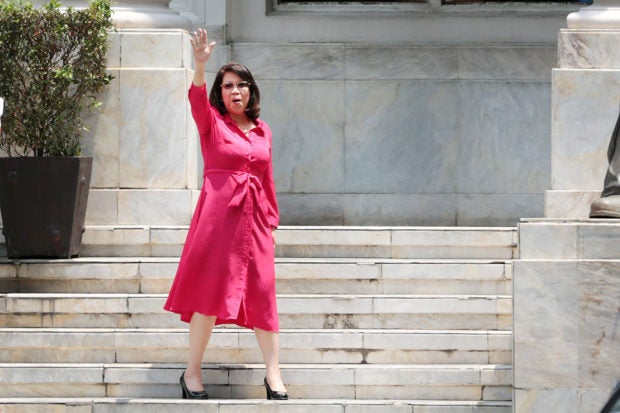 SHE’S BACK Chief Justice Maria Lourdes Sereno waves to her supporters as she returns to work on Wednesday. INQUIRER PHOTO / GRIG C. MONTEGRANDE

Maria Lourdes Sereno returned to work on Wednesday, sending a resounding message to her colleagues in the Supreme Court: I’m still the Chief Justice of the Philippines.

Wearing a fuchsia dress, a defiant Sereno ended her leave and went to her office amid rumor that the majority of her colleagues on the court were dead set on driving her out of the judiciary by granting the quo warranto petition brought against her by Solicitor General Jose Calida.

“She has all the right under the law to come back. She’s still the Chief Justice,” Anacleto Lacanilao III, one of Sereno’s spokespersons, told reporters.

“She is going to stay here until the bitter end. She will not abandon her office,” Lacanilao said. “Whatever happens, she’s not going to back down and she’s not resigning.”

Lacanilao said Sereno would preside over the high tribunal’s special full-court session on Friday but she would not take part in the deliberations on Calida’s petition.

“The only thing she wants to say is that she’s back. She’s ready to resume her job and she just wants to be faithful to her legal duties as Chief Justice,” Lacanilao told the Inquirer.

Sereno is facing an impeachment bid in the House of Representatives, which is dominated by President Rodrigo Duterte’s allies, but Calida has separately petitioned the Supreme Court to remove the Chief Justice for allegedly failing to submit all of her financial statements when she applied for the job in 2012.

Mindoro Oriental Rep. Reynaldo Umali, chair of the House justice committee, said on Wednesday that the panel would wait for the Supreme Court decision before proceeding with the impeachment case.

“If there will be an overwhelming vote favoring the quo warranto petition against the Chief Justice, I will recommend that the impeachment complaint against her be archived,” Umali told reporters.

“But if there is a close vote in favor of the quo warranto petition, we will play it by ear. We will wait for the final Supreme Court ruling before making our final action on the impeachment complaint and I am confident this will be about declaring the process moot,” he said.

The House, however, still has to follow its own rules by voting to dismiss the complaint, he added.

Don’t look at us

Malacañang on Wednesday sought to distance itself from Friday’s action in the Supreme Court.

Presidential spokesperson Harry Roque said in a statement  that the vote on Calida’s petition was an “internal matter to the high court.”

“The executive department recognizes judicial independence and respects the separation of powers of the three branches of government, including a functioning judiciary,” Roque said.

Sereno’s returning to work without the permission of the high tribunal did not sit well with several of its members,

according to two court sources, who both asked not to be identified for lack of authority to speak with journalists.

One of the insiders said some of the justices were considering holding Sereno, who had been forced by her peers to take an indefinite furlough starting March 1, in contempt.

“It was not to her liking that she went on an indefinite leave from the court,” the source told the Inquirer.

“The justices had demanded [that she] temporarily stay out of the court while the impeachment proceeding against her is pending,” the source added. “She clearly defied the [court].”

The same source had earlier disclosed that at least eight justices would vote to approve Calida’s petition during the special full-court session on Friday.

The second source said Sereno was only “inviting trouble” by attending Friday’s deliberations.

“It’s as if she’s challenging her fellow justices,” the source said.

A smiling Sereno stepped out of the Supreme Court’s main building before noon on Wednesday and spent around 40 seconds waiving to reporters  and some of her supporters who were barred from entering the high court’s compound on Padre Faura Street in Manila.

She was supposed to speak with reporters, but some members of her staff advised her to call off the interview as a rowdy group of followers of former Sen. Ferdinand Marcos Jr. had camped out near the high court’s main gate.

According to Lacanilao, Sereno arrived at around 7:30 a.m. and left her office about three hours later to go for a speaking engagement.

He said the Chief Justice signed papers and spent some time speaking with members of her staff.

Lacanilao said Sereno was “very upbeat” and in high spirits “because she knows she has a lot of support from the people.” “She’s unfazed. She knows that if the court would be fair, she [would] be able to prove that [Calida’s petition should be dismissed].”

Lacanilao played down insinuations that Sereno should have sought permission from the court before she returned back to work.

He, however, said the Chief Justice was able to speak with acting Chief Justice Antonio Carpio to inform him of her decision to reassume her responsibilities as head of the judiciary.

“The Chief Justice did not ask for [authorization] from anyone because it was [she] who filed a leave from work. There’s no need for her to ask for permission [to return],” he added.

Lacanilao said Sereno did not want to be accused of dereliction of duty.

“It’s her decision to resume her job as Chief Justice,” he said. —With reports from Jerome Aning, Christine O. Avendaño and AP