Housing agency eyes termination of contracts due to construction delay
By: Melvin Gascon - Correspondent / @melvingasconINQ
Philippine Daily Inquirer / 06:30 AM May 10, 2018 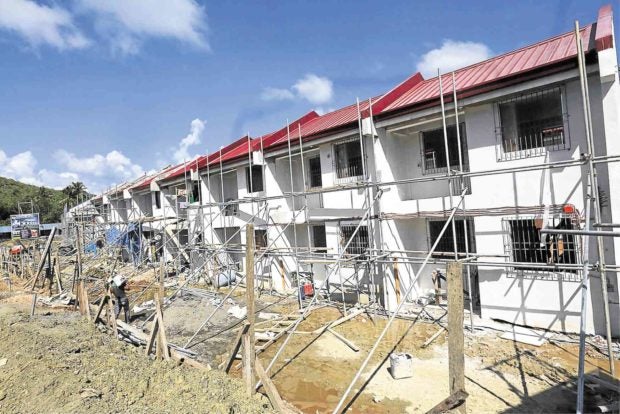 SAFE ZONE Resettlement sites, like this project at Pope Francis Village in Tacloban City, are meant to help “Yolanda” survivors start a new life away from danger zones. JOAN BONDOC

These projects comprise the bulk of 53 contracts which the NHA has sought to cancel, NHA spokesperson Elsie Trinidad said.

“All these 46 [projects] remain unfinished due to [problems in] deployment of resources such as manpower and supplies. Others have incurred negative slippage of more than 15 percent,” she said.

Under the government procurement law, no project should incur a delay of more than the 15-percent slippage rate.

Marcelino Escalada Jr., NHA general manager, announced on Tuesday that he cancelled 20 housing contracts for various defects, and issued notices of termination to 33 other projects across the country.

“We are not only investigating the developers; we are also looking … if there are NHA employees who are also involved [in the irregularity]. If it turns out that they are, then we will also be filing the necessary legal actions,” said lawyer John Christopher Mahamud, Escalada’s chief of staff.

Mahamud said the NHA reactivated a fact-finding committee to look into the liability of contractors, as well as NHA personnel.

He said contractors for the 33 other projects were issued notices requiring them to explain the causes of delay, and justify why their projects should not be cancelled.

“We are working [to have] these contractors blacklisted,” Mahamud said, adding that the NHA was also aware that many contractors escaped liability by hiding under a different company name, or engaging in joint ventures.

The government embarked on a massive rehabilitation work for survivors of Yolanda, after it hit the Philippines in November 2013 and rendered homeless thousands of families in the Visayas.

Of the 205,128 units that the NHA had targeted to build, only 92,088 had been completed. However, only 59,420 units had been occupied, according to records from the housing agency.