The first-ever Philippine Plan of Action to End Violence Against Children (PPAEVAC) was launched on Wednesday to safeguard the youth from physical, psychological, sexual violence and online abuse.

The plan was developed by the Department of Social Welfare and Development’s (DSWD) Council for the Welfare of Children (CWC) of the Department of in partnership with the United Nations Children’s Fund (UNICEF).

UNICEF Philippines OIC-Representative Julia Rees said, “It is concerning that violence pervades on children, committed by people they trust.”

On the positive side, Rees noted that with the PPAEVAC, the Philippines has become a leader in multi-sectoral and comprehensive approach in protecting children.

“The Philippines is really highlighted as country that has taken it seriously and has really demonstrated in providing a very comprehensive and coordinated response to it,” Rees said, noting that the baseline study was done globally.

The PPAEVAC aims to translate into action the findings of the first National Baseline Study on Violence Against Children (NBS-VAC) in 2015 and cascade it to communities nationwide.

One in five children suffered from some form of sexual violence and the most common perpetrators include fathers, brothers, and cousins.

Also, two in five children experienced violence online, either sexual violence or cyberbullying, according to the study.

The CWC’s priority is to cascade the plan from the national government down to the barangay level and eventually the home.

CWC Executive Director Mary Mitzi Cajayon-Uy said the national plan is the country’s response to Convention on the Rights of the Child.

Congress has already expressed support for the implementation and cascading of the plan. Davao City Representative Karlo Nograles, chairman of the finance committee, said, “Congress will support a PHP2.4million budget for the national implementation; as well as PHP2.8 million for the localisation of the PPAEVAC.”

On the part of the Senate, Senator Loren Legarda, chairperson of the finance committee, expressed support through allocation of resources.

Meanwhile, the study identified some strategies that can be adopted until 2022 to reduce violence against children. Some of these are:

1) Help improve the skills of parents and caregivers and encourage them to instill positive;

3) Give children access to quality health, legal, economic and other services./vvp 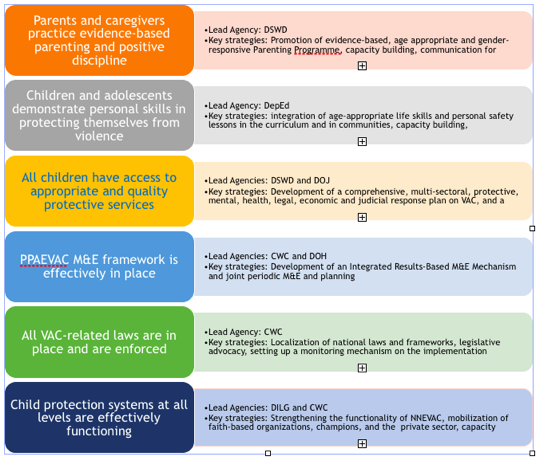