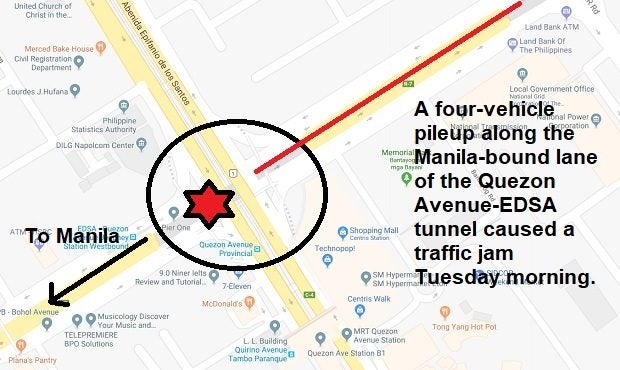 An accident involving four vehicles resulted in a traffic jam along the Manila-bound lanes of Quezon Avenue in Quezon City on Tuesday morning.

Sharon Gentalian of the Metro Manila Development Authority (MMDA) told INQUIRER.net that the accident occurred along the westbound lane of Edsa-Quezon Avenue tunnel at 7:55 a.m.

Gentalian said that the accident involved two Toyota Innovas, a van, and a motorcycle.

She said the collision affected two lanes of the tunnel along Quezon Avenue.

A radio report said traffic was a standstill from Edsa to the Quezon Memorial Circle.

She also noted that the MMDA had yet to determine if there were any injuries from the accident. /cbb

Read Next
No demand from Duterte for Teo to resign – lawyer
EDITORS' PICK
Kalinga, Ifugao, Mt. Province, N. Samar will be under Alert Level 4 from Jan 21-31
Gear up and get ready to play with Yamaha Mio Gear
Mobile COVID-19 vaccination for commuters, transport workers set at PITX
Acer starts the year off strong with the Aspire Vero National Geographic Edition
Municipal court in Pangasinan sets arraignment for ‘Lolo Narding’
31,173 new COVID-19 cases push PH’s active tally to 275,364
MOST READ
Imelda Marcos trends on Twitter after octogenarian jailed for allegedly stealing mangoes
SSS: Members on home quarantine due to COVID-19 can apply for sickness benefit
Villar backs implementation of EDSA decongestion blueprint
Help pours in for octogenarian jailed for ‘stealing’ mangoes in Pangasinan
Don't miss out on the latest news and information.