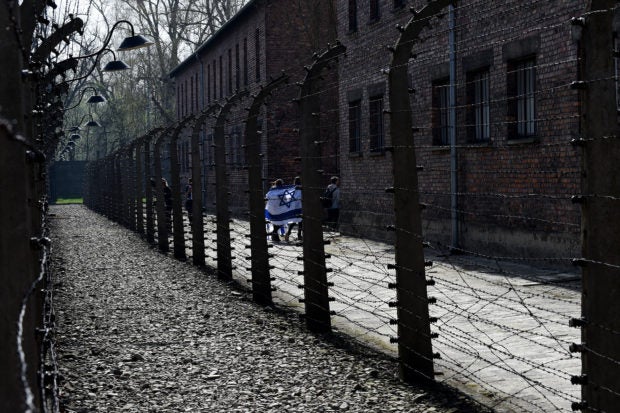 Participants are wrapped into an Israeli flag as they arrive at the memorial site of the Auschwitz-Birkenau Nazi death camp in Oswiecim on April 12, 2018, to attend the annual “March of the Living”. The annual March of the Living, which commemorates the six million Jews killed during the Holocaust, was launched in 1988, drawing thousands of people from around the World, including Jewish youths and elderly Holocaust survivors. (AFP PHOTO / JANEK SKARZYNSKI)

Polish prosecutors said on Monday that an Israeli teenager has admitted to urinating on a memorial at the site of the former death camp Auschwitz-Birkenau, adding that he is willing to pay a fine.

The 19-year-old man committed the act in late March and was arrested the same day, according to Mariusz Slomka, a prosecutor from the southern Polish city of Oswiecim.

A guide from the museum at the site and several other people witnessed the act, according to Slomka, who added that nothing suggested the teenager had been under the influence of drugs or alcohol.

Under Polish law, this kind of offense normally calls for a fine or restriction of freedom, especially community service.

The memorial in question is located between the ruins of the two crematoriums at the former death camp set up by Nazi Germany after occupying Poland during World War II.

Auschwitz-Birkenau has become a symbol of Nazi Germany’s genocide of European Jews, one million of whom were killed at the camp between 1940 and 1945.

More than 100,000 others including non-Jewish Poles, Roma, Soviet prisoners of war, and anti-Nazi resistance fighters also died there.          /kga