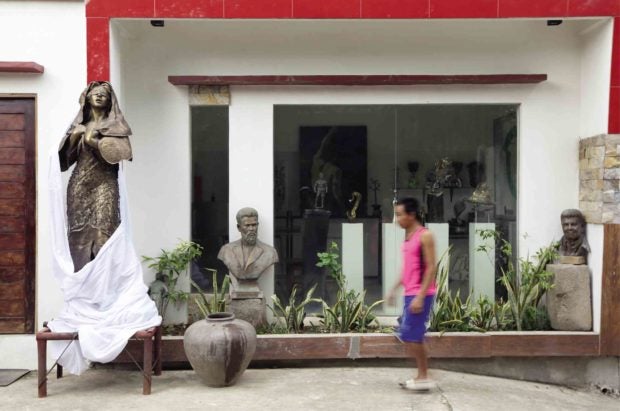 RETURNED TO MAKER The controversial statue is back in the artist’s Antipolo City studio. —NIÑO JESUS ORBETA

“I felt that we lost our dignity,” artist Jonas Roces said of the covert removal of the comfort woman statue on Roxas Boulevard, Manila, by government personnel on Friday evening last week.

Widely regarded as a memorial to the thousands of young Filipino women abused and detained by Japanese soldiers in military brothels during  World War II, the 7-foot tall statue of a mourning woman in blindfold and traditional Filipiniana gown had stood on the busy bayside promenade since its unveiling in December 2017.

City administrators said the statue was removed to pave the way for a flood control project by the Department of Public Works and Highways (DPWH).

The removal was met with protests from several groups, with Tessie Ang See, chair of  Movement for the Restoration of Peace and Order, one of the groups behind the statue’s installation, describing it as “a betrayal of the Philippines and its history.”

President Rodrigo Duterte, who had disavowed knowledge of the DPWH action, said the statue was uprooted to avoid offending Japan, because “it was not the policy of the country to insult other nations.”

Besides, he added, Japan had already apologized and made reparations.

Netizens protesting the statue’s removal have noted the $1.26 billion (P65 billion) in commitments from Japan that the government had secured to finance its infrastructure projects as probably the reason behind the country’s reluctance to offend Japan.

“(But  the statue was) not even a symbol of protest,” Roces said. “Nor was it against the Philippine government or the government of Japan. It was just a reminder of our history so that the future generations would never forget,” said the sculptor of the statue commissioned by the Chinese-Filipino group Tulay Foundation, with support from the National Historical Commission of the Philippines.

The statue had been returned to him for safekeeping, Roces said, adding that it was now kept inside his workshop in Antipolo, away from the public eye.

The President had said that he would not have objected to the statue had it been placed in a private space.

The statue, which Roces said took him three months to complete in 2015, has a lot of symbolisms in its design.

“The blindfold symbolizes injustice or the continuous desire for justice,” he said, referring to the demands of surviving comfort women for an official apology and compensation from Japan, both of which have remained ignored.

The statue’s dress, embellished with images of the perennial grass “cadena de amor” (coral vine), stands for the women’s resilience, Roces said. He added: “Since Japan is the ‘Land of the Rising Sun,’ the statue turned its back to the sea where the sun sets.”

The offer of compensation was also from private donors and not from the Japanese government, the group added.

The apology voiced by Chief Cabinet Secretary Yohei Kono was offensive as well, according to the group, as it described the comfort women as “recruited … by private recruiters,” which implied consent, knowledge and gain for the women, instead of forceful abduction and detention.