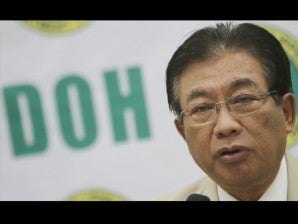 There is no pressing need for former President Gloria Macapagal-Arroyo to go abroad because she is recuperating well from her operations, Health Secretary Enrique Ona said Tuesday.

“She is not in a situation where she needs to leave at once,” Ona said, speaking at a forum organized by the Philippine Information Agency. But he said he last saw Arroyo two weeks ago and had not been updated on her condition.

When a patient undergoes an operation, it may be expected that he or she will lose weight, Ona said, adding that surgery involving bones took three to five months to heal.

Ona also said that he could not compel Arroyo’s physicians to release her medical records, and that it would be up to them to disclose her condition.

But since the former President and now Pampanga representative is a public figure, there is reason to disclose the status of her health, he pointed out.

A Pasay City regional trial court has allowed Arroyo to remain at St. Luke’s Medical Center in Taguig City following her arrest on charges of electoral sabotage. She was confined there when served the warrant for her arrest.

Arroyo had wanted to go abroad, ostensibly to seek medical treatment for a bone disease. She recently underwent surgery for cervical spondylosis, a deterioration of the bones of the neck that causes a misalignment in the spine.

The Philippine Medical Association (PMA) is forming an independent committee that would look into a purported certification by Arroyo’s doctors that there are no experts in the country who can treat her ailment.

If it is found that such a certification exists, the doctors who issued it may be reprimanded or their licenses revoked, according to Dr. Leo Olarte, a PMA governor.

“We will file the appropriate complaint for unprofessional conduct or misrepresentation,” Olarte, an orthopedic surgeon and a lawyer, said yesterday at the weekly forum hosted by the Catholic Media Network in Intramuros, Manila.

When asked why there was a need to establish the existence of such a certification, Olarte said it was crucial because the document, if any, carried “sweeping statements” that might “cause a bad impression on the kind of [medical] practice here in the Philippines.”

He said the planned committee would be composed of orthopedic surgeons, metabolic experts and pathologists.

“It is important to the PMA, especially if the certificate speaks about something that is not true and it affects the good name and reputation of medical practice in this country, to the extent that it will destroy our promotion of medical tourism,” Olarte said.

He said it was only the PMA, the umbrella organization of practicing doctors in the country, that could issue such a certification, and not Arroyo’s doctors.

Arroyo is said to be also afflicted with anorexia nervosa and an intestinal infection.

Olarte said that while anorexia nervosa could be a grave ailment when left untreated, it was Arroyo’s lawyers who could make her feel better.

“The cure can come from her lawyers because the emotional distress is [rooted] in her legal problem,” he said, adding that there were many medicines available in the country that could boost one’s appetite for food.

Olarte also made it clear that the planned independent committee would not investigate Arroyo’s real condition even if her circumstances were no longer covered by medical confidentiality.