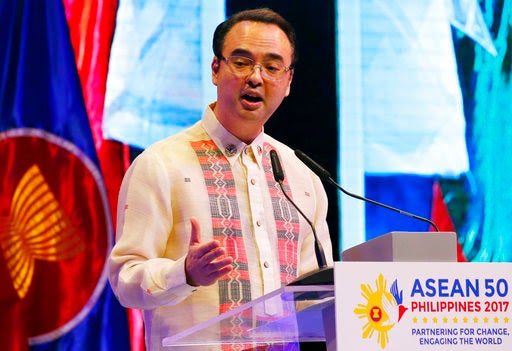 Roque said that “as far as the Palace [was] concerned, there [was] no reason for [Cayetano] to resign” amid calls for him to step down.

“I think he still has the full trust and confidence of the President, and I think what we have in Kuwait is something that can be overcome eventually, sooner or later,” he added.

Career officers at the Department of Foreign Affairs (DFA) had earlier called on Cayetano to resign after a diplomatic row with Kuwait erupted over the covert rescue of abused Filipino housemates, a videotape of which was released by the DFA and went viral on social media.

Roque said Cayetano was investigating the incident and that Malacañang would “defer [to him] for his judgment on what to do with his people.”

Members of the opposition Liberal Party (LP) backed the calls for Cayetano’s resignation, with detained Sen. Leila de Lima saying on Thursday that “there was no room for amateurs when it comes to foreign relations and diplomacy.”

Fellow LP member Sen. Ralph Recto, however, defended Cayetano and said that there were times when DFA officials had to “kick down some doors” to help abused Filipinos abroad.

In a statement, De Lima said Cayetano should listen to the DFA’s disgruntled career officials and acknowledge “his skill-set limitations and lack of experience in the field.”

Recto said that while uploading the video of the rescue was improper, “it [was] equally wrong to equate it [to] a major diplomatic faux pas that would warrant [Cayetano’s] resignation.”

Calling for Cayetano’s resignation will undermine the Philippines’ efforts to help Filipinos abroad, he said.

“When thousands of our OFWs … have sought sanctuaries from abuse, when almost 5,000 of them are behind bars or facing charges, some audacity in representing them is needed,” Recto said.

Meanwhile, Roque said his May 7 visit to Kuwait with Labor Secretary Silvestre Bello III was still being finalized.

He said the trip would be an assessment mission “to see how to move forward with our bilateral ties [with Kuwait], and [see] what the future of the memorandum of agreement is, if any” Roque said.