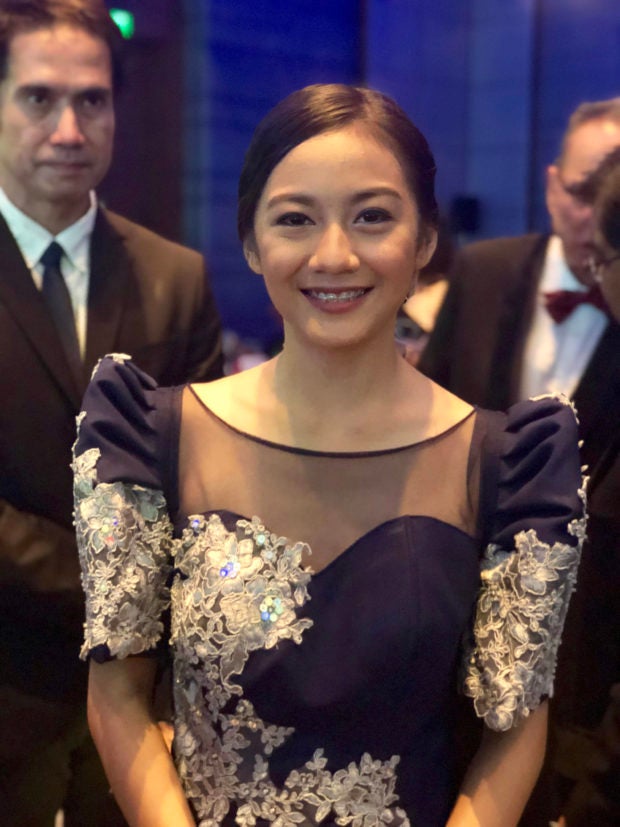 When Dara Mae Tuazon, an Elementary Education major at the University of the East, was 11 years old, she knew that she had found her calling.

“When I see kids on the street with nothing to do, I know that as a future educator, I need to act. I couldn’t stay within the four corners of the classroom: I had to go beyond,” she told the Inquirer.

Armed with coloring books she photocopied herself and crayons and pencils from her home in San Fernando, Pampanga, she transformed a vacant lot into a makeshift classroom for street kids — a journey that took her to many villages later and led her to a much bigger advocacy .

On Wednesday, she was conferred the first-ever The One Philippines (TOP) Humanitarian Award.

Recognizing Tuazon as an unsung community hero “in the style of Mother Teresa,” the award came with a P1.5-million grant to support her cause. An additional P250,000 were donated by people who believe in her advocacy.

Donning a navy blue Filipiniana dress, the 19-year-old accepted the honor at the Marriott Hotel in Pasay City. She will represent the country at The One International Humanitarian Award in Hong Kong, where she has a chance to take home another $100,000 (P5 million) in prizes.

TOP, a subsidiary of The One International Humanitarian Award, was founded in 2017 by Hong Kong businessman and Rotary International member David Harilela. Over 30 awardees have been recognized worldwide, and $2 million (P104 million) has since been alotted to support various causes.

Asked how she would spend the prize money, Tuazon said she has an ambitious wishlist. Through the foundation she launched in 2017, Bangketa Eskwela Foundation Inc., the aspiring preschool teacher said she wants to support scholars, build a school, purchase teaching equipment, and donate to outreach programs.

Tuazon won the award after a highly selective, yearlong process wherein three separate judging panels, which included Sen. Grace Poe, the chairs of top companies, and the president of Ateneo de Manila University, narrowed down their choice to three finalists.

The runners up were Dr. Roel Cagape, a Mindanao-based doctor who provides free care to indigenous peoples in far-flung communities, and Chad Stamatelaky, an artist who works with abandoned children and has even adopted 12 of them with his wife, Melay.

Both Cagape and Stamatelaky received P500,000 to continue their work.

Tuazon shared that she met three street children in Sampaloc, Manila near her school in 2016, and started to teach them shapes and numbers when she found out they were not in school

The three children eventually increased to 35. They were between the ages of three to 14 and she taught them basic lessons that are also values-based lessons in a temporary classroom behind the university gate.

Tuazon now teaches over a hundred out-of-school youth in the different villages in Manila. Her foundation also offers an expanded program that includes feeding, medical and dental sessions as well as good parenting seminars.

“We plan to have branches outside Metro Manila […] And I think we can help every child [who lacks education] in the Philippines. That’s our ultimate goal,” she said /ee