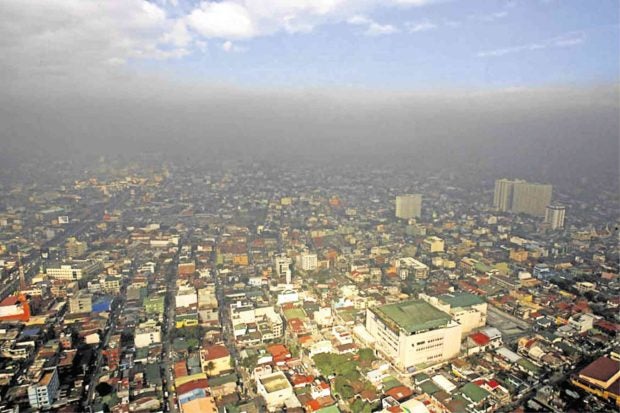 THIRD HIGHEST DEATH RATE The Philippines has the third highest death rate in the region
after China and Mongolia due to outdoor air pollution, says WHO. —FILE PHOTO

Pollution caused by traditional cooking fuel is killing people in the Philippines at higher rates than those in most other countries in the Asia-Pacific region, according to the World Health Organization (WHO).

The Philippines has earned the distinction of having the region’s second biggest number of deaths due to indoor air pollution, WHO said in a recent report.

Data gathered by the world  health agency showed that close to 84 deaths per 100,000 Filipinos were recorded in 2016 due to indoor or household air pollution.

This put the Philippines second only to Laos, where at least 85 deaths per 100,000 population were recorded.

“Air pollution is the most lethal environmental health threat in our region, and it affects people in middle-income countries at a much higher rate than those in high-income countries,” WHO regional director for Western Pacific, Dr. Shin Young-soo, said in a statement on Wednesday.

Use of kerosene, wood

The number of deaths related to indoor air pollution in the Philippines may be due to the use of kerosene and wood in stoves, open fires and lamps.

WHO noted that women and children were “most at risk” of household air pollution, as more than 40 percent of the world’s population had no access to clean cooking fuels and technologies in their homes.

Outdoor air pollution is mainly caused by the “inefficient energy use in households, industry, the agriculture and transport sectors, and coal-fired power plants.”

WHO said air quality could also be influenced by geographical, meteorological and seasonal factors.

Its new estimates also show that nine out of every 10 people worldwide breathe air “containing high levels of pollutants.”

Of the 7 million premature deaths due to air pollution, a third, or 2.2 million, were from the Western Pacific region, which includes the Philippines, WHO said.

More than half of the 2.2 million deaths related to air pollution were due to heart disease or stroke.

Despite the latest data, WHO said  the Western Pacific region had shown some “progress” in the last few years as measures were being taken to reduce air pollution from particulate matter. As a result, deaths went down by 600,000 from 2.8 million in 2012.

“Many of the world’s megacities exceed WHO guideline levels for air quality by more than five times, representing a major risk to people’s health,” said Dr. Maria Neira, WHO director of public health, environmental and social determinants of health.

Neira added that the “good news is that we are seeing more and more governments increasing commitments to monitor and reduce air pollution as well as more global action from the health sector and other sectors like transport, housing and energy.”

WHO is expected to hold later this year the first Global Conference on Air Pollution and Health, which aims to bring together governments and partners in an effort to improve air quality and combat climate change. —Jovic Yee